Delve into Bamenda in Cameroon

Current time in Bamenda is now 11:17 PM (Tuesday) . The local timezone is named " Africa/Douala " with a UTC offset of 1 hours. Depending on your travel modalities, these larger destinations might be interesting for you: Yaoundé, Mbengwi, Douala, Buea, and Awing Bambuluwe. While being here, make sure to check out Yaoundé . We encountered some video on the web . Scroll down to see the most favourite one or select the video collection in the navigation. Are you curious about the possible sightsseing spots and facts in Bamenda ? We have collected some references on our attractions page.

Nkwen is one half of Bamenda.Mankon,nkwen and mendankwe,make up the big Bamenda.Bamenda is politically known in the Cameroons and the world at large for it part in every sphere of Cameroon life. ..

This is a special procession to carry "The Word" to the alter during Mass. Music and dance are from the Kom tradition in Cameroon and the occasion was the celebration of Father Francis Moma's first ma ..

This video carries some highlights during the august visit of His Royal Highness Fon Seem Mbinglo 1 to his subjects at Bamenda on 19th March 2012. The reception was organised at Ghana Street where a l ..

Bamenda, also known as Abakwa and Mankon Town, is a city in northwestern Cameroon and capital of the North West Region. The city had a population of about 800,000 people at the 2012 Census, and is located 366 km (227 mi) north-west of the Cameroonian capital, Yaoundé. Bamenda is known for its cool climate and scenic hilly location.

Bamenda Airport is an airport serving Bamenda, the capital of the Northwest Province in Cameroon.

Momo is one of the Divisions of the North West Province of Cameroon, now North West Region according to the constitutional changes brought about by the Biya Regime. The other Divisions include Boyo, Bui, Donga-Mantung, Menchum, Ngoh-Kehtunja and Mezam which hosts the Regional Headquarters in Bamenda. Momo Division is peopled by the Widikum tribe, five of whose clans are represented in the Division: the Menemo, the Moghamo, the Ngie, the Ngwaw,and the Oshie.

Santa is a town and commune in Cameroon.

Bali Airport is an airport serving Bali in Cameroon. 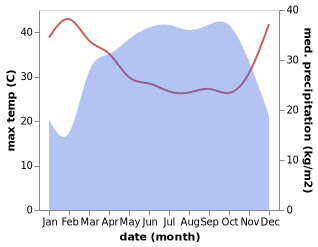