Local time in Xingguo is now 09:57 PM (Thursday) . The local timezone is named " Asia/Chongqing " with a UTC offset of 8 hours. Depending on your flexibility, these larger cities might be interesting for you: Yunshan, Yinchuan, Xining, Xitan, and Bange. When in this area, you might want to check out Yunshan . Are you looking for some initial hints on what might be interesting in Xingguo ? We have collected some references on our attractions page.

Qin'an County is an administrative district in Gansu, the People's Republic of China. It is one of 58 counties in Gansu, and administratively under Tianshui prefecture, with the city of the same name being the prefecture seat. Its postal code is 741600, and in 1999 its population was 567,553 people. It is reputedly the county where Zhuge Liang's troops, commanded by Ma Su, were defeated by Zhang He at the Battle of Jieting 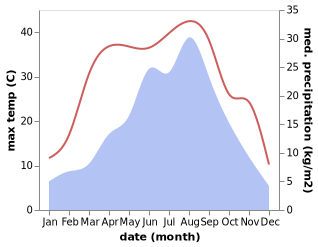