Current time in Chaozhou is now 03:57 AM (Saturday) . The local timezone is named " Asia/Shanghai " with a UTC offset of 8 hours. Depending on the availability of means of transportation, these more prominent locations might be interesting for you: Zhangzhou, Shenzhen, Shantou, Jieyang, and Paotai. Since you are here already, make sure to check out Zhangzhou . We encountered some video on the web . Scroll down to see the most favourite one or select the video collection in the navigation. Where to go and what to see in Chaozhou ? We have collected some references on our attractions page.

I went to the city of Chaozhou in the province of Guandong in China to teach english for two weeks. It was a fun and enriching experience. ..

Preview of Hsa's blog at TravelPod. Read the full blog here: www.travelpod.com This blog preview was made by TravelPod using the TripAdvisor™ TripWow slideshow creator. Learn more about these videos: ..

Chaozhou; alternatively spelled Chiuchow, transliterated from its Cantonese pronunciation; also widely known by its Postal map spelling Teochew), is a city in eastern Guangdong province of the People's Republic of China. It borders Shantou to the south, Jieyang to the southwest, Meizhou to the northwest, the province of Fujian to the east, and the South China Sea to the southeast.

Guangji Bridge, also known as Xiangzi Bridge is an ancient bridge that crosses the Han River in Chaozhou, Guangdong province, China. A key cultural relic under national protection, the bridge is renowned as one of China's four famous ancient bridges; the other three are the Zhaozhou Bridge, the Luoyang Bridge and the Lugou Bridge. The Guangji was originally a pontoon bridge built in AD 1170 during the Southern Song Dynasty with a length of 518 metres .

Xiangqiao District is a district under the administration of Chaozhou city, in Guangdong province of the People's Republic of China. Its name comes from the ancient Xiangzi Bridge that once lay in its territory. The total area of the district is 155.14 square kilometers, and its population in 2003 was 343,500 people. 78,800 of these people are farmers, while 264,600 are not.

Chao'an County is a county in eastern Guangdong Province. It has an area of 1238.77 square kilometers and a population of 1,076,500. It is under the jurisdiction of Chaozhou prefecture-level city.

Chenghai is a district of the city of Shantou, Guangdong Province, People's Republic of China. It is the birthplace of Qin Mu, and Zheng Yong, the father of Taksin who was a Thai king. It is located in the southeast part of Guangdong Province. Chenghai was a town founded since 1563 AD, under Teochew jurisdiction, controlled by Shantou City from 1983 to 1994. From 1994 onward, Chenghai was upgraded to a county-level city and was administrated by the Provincial Government directly. 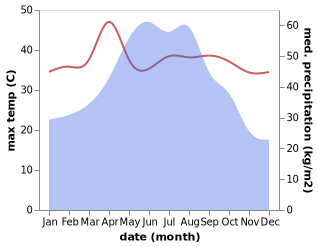