Time in Guangzhou is now 11:38 PM (Wednesday) . The local timezone is named " Asia/Shanghai " with a UTC offset of 8 hours. Depending on your budget, these more prominent places might be interesting for you: Zhaoqing, Zhuhai, Shenzhen, Shaoguan, and Shantou. Being here already, consider visiting Zhaoqing . We collected some hobby film on the internet . Scroll down to see the most favourite one or select the video collection in the navigation. Check out our recommendations for Guangzhou ? We have collected some references on our attractions page.

This is a famous shopping area "walk-and-shop" street in Guangzhou. A day & night timelapse shot. I chose the song not because of the lyric, but it is the length fitted to my video. DC2 WMM ..

Music of China THE VLTAVA:BEDRICH SMETANA

Music of China, from China with love. Music is my passion and my world. Music makes me happy and improves my inside beauty. I fills the hearts of lovers with music. Lift the spirt of those who are sad ..

tripwow.tripadvisor.com - Created at TripWow by TravelPod Attractions (a TripAdvisor™ company) Shamian Island Guangzhou This lovely, tree-lined neighborhood bordering the Pearl River was once home to ..

Strange to be White in Coloured Guangzhou City Eddakath's photos around Guangzhou, China

The Thirteen Factories was an area of Canton (Guangzhou), China, where the first foreign trade was allowed in the 18th century since the hai jin （海禁）ban on maritime activities. It is also referred to as the "Thirteen Hongs" or the "Canton Factories". The site where the factories stood is now Wenhua Park, and Thirteen Hong Street, onto which the factories backed is now named Shisanhang Road.

The Cathedral of the Sacred Heart of Jesus (耶穌聖心主教座堂) also known as Stone House (石室) by local, is a Roman Catholic cathedral in Guangzhou (Canton), South China. It is the seat of the Archbishop of Roman Catholic Archdiocese of Guangzhou (Canton). The cathedral is located at 56 Yide Lu (or Yat Tak Road), Guangzhou. It is on the north bank of the Pearl River and stands at the heart of the busy old town.

The Huaisheng Mosque, also known as the Lighthouse Mosque, is the main mosque of Guangzhou. Rebuilt many times over its history, it is traditionally thought to have been originally built over 1,300 years ago, which would make it one of the oldest mosques in the world. It was named in memory of Prophet Muhammad. The most unusual (in the Chinese context) feature of the mosque is its "calling tower" (minaret). The round tower is 36 meters tall with a pointed tip.

Shamian Island, formerly known as Shameen Island or Shamin Island, from its Cantonese pronunciation, is a sandbank island in the Liwan District of Guangzhou city, Guangdong province, China. The island's name literally means "sandy surface" in Chinese. The territory was divided into two concessions given to France and the United Kingdom by the Qing government in the 19th century.

Guangzhou is the capital and largest city of the Guangdong province, People's Republic of China. Located on the Pearl River, about 120 km north-northwest of Hong Kong and north-northeast of Macau, Guangzhou is a key national transportation hub and trading port. One of the five National Central Cities, it holds sub-provincial administrative status. Guangzhou is the third largest Chinese city and southern China's largest city. As of the 2010 census, the city had a population of 12.78 million.

More reading: Wikipedia Article
Located at 23.13 113.26 (Lat./Long.); Less than 2 km away
Tags: 214 BC establishments, Guangzhou, Provincial capitals in China, Sub-provincial cities in the People's Republic of China, Treaty of Nanking 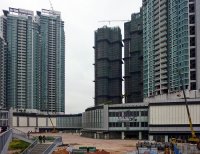 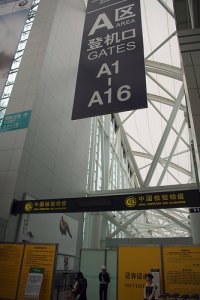 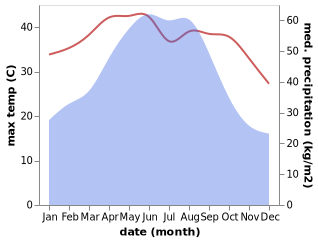