Local time in Changchun is now 02:08 AM (Monday) . The local timezone is named " Asia/Harbin " with a UTC offset of 8 hours. Depending on your flexibility, these larger cities might be interesting for you: Hamhung, Yongchun, Yijianpu, Xinglongshan, and Tongliao. When in this area, you might want to check out Hamhung . We found some clip posted online . Scroll down to see the most favourite one or select the video collection in the navigation. Are you looking for some initial hints on what might be interesting in Changchun ? We have collected some references on our attractions page.

Xinjiang Family Style Noodles This is the first episode of our online video cookbook. This is a little bit like chunky spaghetti, but with an arabic accent. This recipe comes from Xinjiang, the northw ..

Driving past the restaurants and shops while returning to the foreign student hotel/dormitory. ..

Going through a roundabout in Changchun in a taxi. Relatively slow traffic. ..

Playing in the door display aisle in Orient Home (something like a cross between Lowe's and Ikea) in Changchun, China. ..

Manchukuo or Manshū-koku was a puppet state in modern northeast China and Inner Mongolia, governed under a form of constitutional monarchy. The area, collectively known as Manchuria, was designated by China's erstwhile Qing Dynasty as the "homeland" of the ruling family's ethnic group, the Manchus. In 1931, Japan seized the region following the Mukden Incident and installed a pro-Japanese government one year later with Puyi, the last Qing emperor, as the nominal regent and emperor.

The Changchun Wuhuan Gymnasium is an indoor arena in Changchun, China. The arena used mainly for indoor sports. The facility has a capacity of 11,428 people and was opened in 1994. It hosted the figure skating as well as the opening and closing ceremonies for the 2007 Asian Winter Games.

Changchun City Stadium is a multi-purpose stadium in Changchun, China. It is predominately used for football matches. The stadium holds 38,500. It is currently the home of Changchun Yatai of the Chinese Super League. 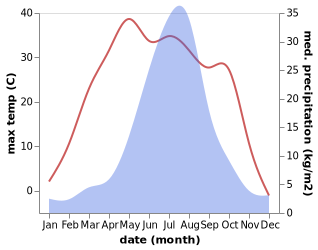