Delve into Mengdadazhuang in China

Current time in Mengdadazhuang is now 05:56 PM (Sunday) . The local timezone is named " Asia/Chongqing " with a UTC offset of 8 hours. Depending on your travel modalities, these larger destinations might be interesting for you: Lintan Chengguanzhen, Zengjia, Yinchuan, Xining, and Xincheng. While being here, make sure to check out Lintan Chengguanzhen . Are you curious about the possible sightseeing spots and facts in Mengdadazhuang ? We have collected some references on our attractions page.

Lajia is an archaeological site located in Minhe County, Haidong Prefecture in Northwest China's Qinghai province. Lajia is associated with the Qijia culture and was discovered by archaeologists in 2000. The site covers an area of around 200,000 square meters. Archaeologists believe the site was abandoned after being devastated by an earthquake and subsequent flood. In 2002, the oldest intact noodles yet discovered were located at Lajia, estimated at over 4,000 years old. 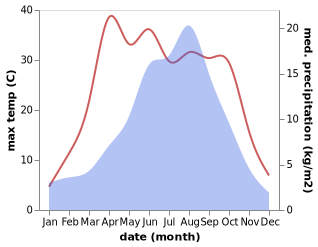