Current time in Tongzilin is now 02:25 AM (Saturday) . The local timezone is named " Asia/Chongqing " with a UTC offset of 8 hours. Depending on the availability of means of transportation, these more prominent locations might be interesting for you: Zhongxin, Zhashi, Yuanma, Yongding, and Yongbei. Since you are here already, make sure to check out Zhongxin . Where to go and what to see in Tongzilin ? We have collected some references on our attractions page.

The Nyag Qu or Yalong River, also called the Ya-lung River is an 822 mile (1,323 kilometers) long river in the Sichuan province of southwestern China. It is a tributary of the Yangtze River. Its source originates from the Tibet-Qinghai Plateau in southeast Qinghai, and its confluence with the Yangtze is in Panzhihua in southwestern Sichuan.

More reading: Wikipedia Article
Located at 26.61 101.80 (Lat./Long.); Less than 12 km away
Tags: Geography of Sichuan, Rivers of China, Rivers of Sichuan, Tributaries of the Yangtze River

Panzhihua Baoanying Airport is the airport serving Panzhihua, Sichuan province, People’s Republic of China. The airport opened in December 2003. Construction of the airport began in 2000 and cost a total of 1.1 billion yuan. However the airport closed on June 2012 due to the landslide.

Renhe District is a district of Sichuan Province, China. It is under the administration of Panzhihua city. 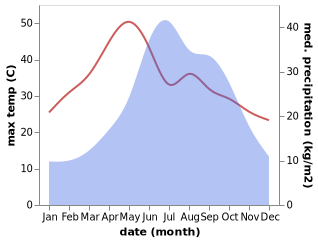