Delve into Burang in China

Local time in Burang is now 11:17 PM (Tuesday) . The local timezone is named " Asia/Kashgar " with a UTC offset of 8 hours. Depending on your mobility, these larger destinations might be interesting for you: Shimla, New Delhi, Lucknow, Agra, and Toding. While being here, you might want to check out Shimla . We discovered some clip posted online . Scroll down to see the most favourite one or select the video collection in the navigation. Are you curious about the possible sightsseing spots and facts in Burang ? We have collected some references on our attractions page.

May 2005, Evacuating our colleague Mr Gokul Pattnaik in a helicopter who had an attack of HAPE (High altitude Pulmonary Edema). The helicopter lands on the right bank of Karnali at Hilsa Border betwee ..

NOTE: You can choose language for captions (Telugu or English) by clicking "CC" (Closed Captions) symbol at the bottom right corner of the video window and selecting the language. -------------------- ..

Burang, known as Purang in Tibetan, is the main town in Burang County in Ngari Prefecture in the Tibet Autonomous Region of China. It is situated to the south of Mount Kailash, near the borders with India and Nepal. The town lies at an altitude of 4755 metres (13,205 feet). The Tibetan name of the town (spu hreng) is a corruption of the Zhang-zhung words pu hrang, meaning 'horse head'.

Lipulekh is a Himalayan pass connecting the Kumaon region of Uttarakhand in the Pithoragarh district in India with the old trading town of Taklakot in Tibet. It has been used since ancient times by traders, mendicants and pilgrims transiting between India and Tibet. This is used by Manasarovar pilgrims. Presently, it is a border post manned by the Indo-Tibetan Border Police.

Om Parvat (also Adi Kailash, Little Kailash, Jonglingkong Peak, Baba Kailash, Chhota Kailash) is a mountain in the Himalayan mountain range, lying in the Pithoragarh district of Uttarakhand, India, near Sinla pass. It is considered sacred by Hindus and its snow deposition pattern resembles the sacred 'AUM' (ॐ). Its appearance is distinctly similar to Mount Kailash in Tibet. Near Om Parvat lie Parvati Lake and Jonglingkong Lake. Jonglingkong Lake is sacred, as Mansarovar, to the Hindus. 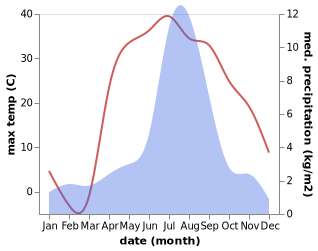