Current time in Vis is now 10:24 AM (Thursday) . The local timezone is named " Europe/Zagreb " with a UTC offset of 1 hours. Depending on the availability of means of transportation, these more prominent locations might be interesting for you: Vieste, Termoli, Rome, Bari, and Zadar. Since you are here already, make sure to check out Vieste . We encountered some video on the web . Scroll down to see the most favourite one or select the video collection in the navigation. Where to go and what to see in Vis ? We have collected some references on our attractions page.

The village Rukavac is located on the southside of the island Vis and is reachable by 9 km road that leads all the way to and from the city of Vis. The city Vis is also reachable by a ferry or hydro-b ..

Vis is a town on the same-named island in the Adriatic Sea in southern Croatia. It has a population of 1,920 residents (as of 2011). The town is also the seat of the eponymous Vis municipality, one of the two municipalities on the island (the other one being Komiža) which both administratively belong to the Split-Dalmatia County.

The Battle of Lissa (sometimes called the Battle of Vis; French: Bataille de Lissa; Italian: Battaglia di Lissa; Croatian: Viška bitka) was a naval action fought between a British frigate squadron and a substantially larger squadron of French and Venetian frigates and smaller ships on 13 March 1811 during the Adriatic campaign of the Napoleonic Wars.

Podšpilje is a village in Croatia on the island of Vis . It is connected by the D117 highway.

Vis is a small Croatian island in the Adriatic Sea. The farthest Island off the Croatian Coast, it has a population of 3,617 and an area of 90,26 km. The highest point is Hum, 587 metres above sea level. The islands two largest communities are town of Vis, the islands commercial port located in the east, and Komiža (Italian: Comisa; pop. 1,677) in the west. The Municipality of Vis, which includes the offshore islands of Budikovac (pop. 1) and Biševo (pop.

Komiža is a Croatian coastal town lying on the western coast of the island of Vis in the central part of the Adriatic Sea. As of 2011 Komiža proper has a population of 1,375 while the entire municipality has 1,509 residents. Komiža is located at the foot of the Hum hill (587 m). An average air temperature in January is 8.9 °C . Economy is based on farming, winemaking, fishing and fish processing, seafaring and in recent times on tourism. The fisherman are noted for their Falkuša vessels. 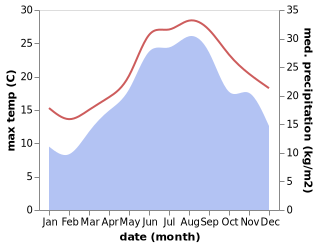