Local time in Vir is now 06:35 AM (Tuesday) . The local timezone is named " Europe/Zagreb " with a UTC offset of 1 hours. Depending on your mobility, these larger cities might be interesting for you: Munich, Budapest, Bratislava, Rome, and Zadar. When in this area, you might want to check out Munich . We discovered some clip posted online . Scroll down to see the most favourite one or select the video collection in the navigation. Are you looking for some initial hints on what might be interesting in Vir ? We have collected some references on our attractions page.

Vir is an island on the Croatian coast of Adriatic sea with an area of 22 km located north of the city of Zadar. It is connected to the mainland via a road bridge. The only village on the island is the eponymous village of Vir, with a population of 1,608 (2001).

Povljane is a village in Croatia in the Zadar County. According to the 2001 census, there are 713 inhabitants, 99% of which are Croats.

Privlaka is a municipality in Zadar County in Croatia. According to the 2001 census, there are 2,199 inhabitants in the area, 98% of which are Croats.

Nin (Latin: Aenona or Nona) is a town in the Zadar county of Croatia, population 1,256 (2001), total municipality population 4,603 (2001). Nin was historically important as a centre of a medieval Christian Bishopric. Up to the abolition and Latinization imposed by King Tomislav in the first half of the 10th century, Nin was the centre of the autonomous Croatian branch of the Church. Nin was also the seat of the Princes of Dalmatia. 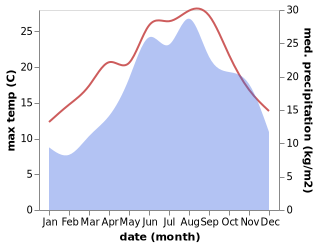