Current time in Moutiers is now 04:56 AM (Friday) . The local timezone is named " Europe/Paris " with a UTC offset of 1 hours. Depending on the availability of means of transportation, these more prominent locations might be interesting for you: Geneva, Saint-Martin-de-Belleville, Saint-Bon-Tarentaise, Macot-la-Plagne, and La Pombliere. Since you are here already, make sure to check out Geneva . We encountered some video on the web . Scroll down to see the most favourite one or select the video collection in the navigation. Where to go and what to see in Moutiers ? We have collected some references on our attractions page.

Les 2 Alpes offers over 80 summer activities, and is an amazing place for a family activity holiday, as well as for those looking for relaxation and renewal. Alpine Elements Activity Holidays include ..

Tim Wall reports from a fresh but snow free La Tania with the first snow report of the 2012-13 season. Filming by Rich from altivisual.com ©latania.co.uk ©altivisual.com ..

Moûtiers Cathedral (Cathédrale Saint-Pierre de Moûtiers) is a Roman Catholic church and former cathedral, and national monument of France, in Moûtiers en Tarentaise. It was formerly the seat of the Archdiocese of Tarentaise, abolished under the Concordat of 1801.

Moûtiers-Salins-Brides-les-Bains is a railway station in the Savoie département of France. The station serves the town of Moûtiers, and is is served by three major high speed services, the TGV, Eurostar and Thalys.

The small village of Pussy is in the commune of La Léchère in the Savoie département of France, not far from Moûtiers. The residents of Pussy are known as Pussies. The name derives from the Gallo-Roman name Pusiacum, from pusus meaning little boy. Lying near the river Isère and the mountain of Mont Bellachat, the village boundary covers 18 km² (6.8 mile²). The local church, dedicated to Saint John the Baptist, was rebuilt in 1669.

Refuge de la Traie is a refuge in the Alps.

La Tania is a ski resort in the Courchevel area of Les Trois Vallees at 1400m above sea level. It was developed for the Albertville Olympics of 1992 and can be reached by road, being about 25 minutes drive from Moutiers. 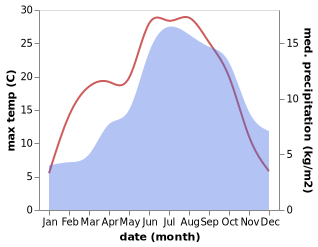