Local time in Chemnitz is now 06:52 AM (Wednesday) . The local timezone is named " Europe/Berlin " with a UTC offset of 1 hours. Depending on your mobility, these larger cities might be interesting for you: Stollberg, Niederwiesa, Munich, Muhlau, and Leipzig. When in this area, you might want to check out Stollberg . We discovered some clip posted online . Scroll down to see the most favourite one or select the video collection in the navigation. Are you looking for some initial hints on what might be interesting in Chemnitz ? We have collected some references on our attractions page.

One and a half year ago, Chemnitz was my first testing ground for tiltshift-timelapse technique. I still live here, but next year, same time I'll surely be gone - so this is my tiltshift-goodbye! I sh ..

The Gunzenhauser Museum is a museum and art gallery located in Chemnitz; third largest city of Saxony, Germany. It contains 2,459 works by 270 modern artists of the 20th century that have been collected by the art dealer Dr. Alfred Gunzenhauser. The Gunzenhauser Museum was inaugurated in December 2007 in the presence of the German President Horst Köhler and is one of the most important museums of Modern Art in Germany.

The Chemnitz Opera (Opernhaus Chemnitz) is an opera house and opera company in Chemnitz. The building, designed by the German architect Richard Möbius, was constructed between 1906 and 1909. Following its destruction during World War II, it was reconstructed between 1947 and 1951. It was renovated again in 1988 - 1992, and is considered to be one of the most modern opera houses in Europe. The house can accommodate 720 patrons.

Chemnitz Central Station (Chemnitz Hauptbahnhof) is a railway station in Chemnitz in Germany.

Stadion an der Gellertstraße is a single-use football stadium in Chemnitz, Germany and the home stadium of Chemnitzer FC. Between 1950 and 1990, the stadium was called "Dr. Kurt-Fischer-Stadion". The stadium was later nicknamed the "Fischerwiese".

Chemnitzer Land is a former district in the Free State of Saxony, Germany. It was bounded by (from the north and clockwise) the district of Mittweida, the city of Chemnitz, the districts of Stollberg and Zwickauer Land and the state of Thuringia. 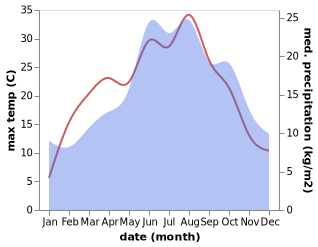