Time in Corinth is now 03:34 PM (Monday) . The local timezone is named " Europe/Athens " with a UTC offset of 2 hours. Depending on your travel resources, these more prominent places might be interesting for you: Xilokeriza, Vrakhation, Lacedaemon, Sofikon, and Periyialion. Being here already, consider visiting Xilokeriza . We collected some hobby film on the internet . Scroll down to see the most favourite one or select the video collection in the navigation. Check out our recomendations for Corinth ? We have collected some references on our attractions page.

The Diolkos (Δίολκος, from the Greek διά, dia "across" and ὁλκός, holkos "portage machine") was a paved trackway near Corinth in Ancient Greece which enabled boats to be moved overland across the Isthmus of Corinth. The shortcut allowed ancient vessels to avoid the long and dangerous circumnavigation of the Peloponnese peninsula.

The old railway station in Corinth was a station on the Piraeus–Patras line. It closed on 9 July 2007, having been replaced by a new station on a new line.

Historical and Folklore Museum of Corinth

The Historical and Folklore Museum of Corinth is a museum in Corinth, Greece.

The Corinth Canal (Greek: Διώρυγα της Κορίνθου) is a canal that connects the Gulf of Corinth with the Saronic Gulf in the Aegean Sea. It cuts through the narrow Isthmus of Corinth and separates the Peloponnesian peninsula from the Greek mainland, thus effectively making the former an island. The builders dug the canal through the Isthmus at sea level; no locks are employed. It is 6.4 kilometres in length and only 21.3 metres wide at its base, making it unpassable for most modern ships.

The Isthmus of Corinth is the narrow land bridge which connects the Peloponnese peninsula with the rest of the mainland of Greece, near the city of Corinth. The word "isthmus" comes from the Ancient Greek word for "neck" and refers to the narrowness of the land. The Isthmus was known in the ancient world as the landmark separating Peloponnese from mainland of Greece. Theseus, on his way to Athens erected a pillar on the Isthmus of Corinth, which bears two inscriptions. 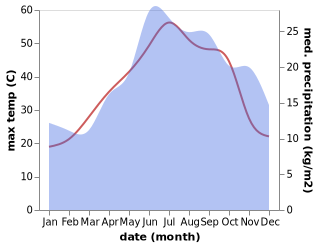