Conakry in the region of Conakry with its 1,767,200 inhabitants is a town in Guinea and is the capital of this country.

Current time in Conakry is now 08:41 AM (Sunday) . The local timezone is named " Africa/Conakry " with a UTC offset of 0 hours. Depending on the availability of means of transportation, these more prominent locations might be interesting for you: Ziguinchor, Monrovia, Bissau, Freetown, and Bo. Since you are here already, make sure to check out Ziguinchor . We encountered some video on the web . Scroll down to see the most favourite one or select the video collection in the navigation. Where to go and what to see in Conakry ? We have collected some references on our attractions page.

This is the Corniche Nor. www.attawayjl.com ..

Just a short video of flying into Conakry, Guinea. www.attawayjl.com ..

Gamal Abdel Nasser University, also Institut Polytechnique de Conakry is a university in Conakry, Guinea. The university was established in 1962 (not 1974 as the source says) with 13 schools and faculties, including medicine. It was established during a period of progressive economic development in the country after independence.

Stade 28 Septembre is a multi-purpose stadium in Conakry, Guinea. It is currently used mostly for football matches. The stadium has a capacity of 35,000 people. In an attempt to host the 2016 African Cup of Nations (ANC), or Coupe d'Afrique des Nations (CAN) in French, proposals have been made to upgrade or reconstruct the 28 September Stadium to an all seater capacity of 75,000–80,000 people.

The 8 November Bridge (Pont 8 Novembre) is a bridge in Conakry, Guinea. It has strategic significance, given that the bridge cuts the Central Business District off from the rest of the city. During coups the bridge has played an important role.

More reading: Wikipedia Article
Located at 9.53 -13.69 (Lat./Long.); Less than 2 km away
Tags: Bridges in Guinea, Buildings and structures in Conakry

The Palais du Peuple (Palace of the People) is a venue for important events in Conakry, Guinea. In 2008, the building underwent serious renovations prior to celebrations for Guinea's 50th anniversary of independence.

More reading: Wikipedia Article
Located at 9.52 -13.69 (Lat./Long.); Less than 3 km away
Tags: Buildings and structures in Conakry, Palaces in Guinea 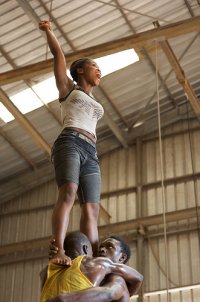 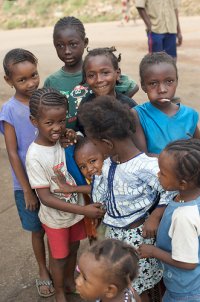