Port-au-Prince in the region of Ouest with its 1,234,742 inhabitants is a town in Haiti and is the capital of this country.

Current time in Port-au-Prince is now 03:25 PM (Monday) . The local timezone is named " America/Port-au-Prince " with a UTC offset of -4 hours. Depending on the availability of means of transportation, these more prominent locations might be interesting for you: Santo Domingo, Santiago de los Caballeros, Santa Cruz de Barahona, San Juan de la Maguana, and Salvaleón de Higüey. Since you are here already, make sure to check out Santo Domingo . We saw some video on the web . Scroll down to see the most favourite one or select the video collection in the navigation. Where to go and what to see in Port-au-Prince ? We have collected some references on our attractions page.

This Is Haiti (My Family Reunion)

After 27 years i finally return to my homeland. The place of my birth Haiti. In this video im documenting my trip to Haiti as well as my family reunion in Petit Goave. There's much more to Haiti than ..

The streets of Haiti's capital city. ..

Trees, Water & People (TWP) is driving development in Haiti through social enterprise. Over the past 16 months, TWP has been working to build a sustainable market for clean cookstoves in Port-au-Princ ..

The National Palace (Palais National) was located in Port-au-Prince—facing Place L'Ouverture near the Champs de Mars—and is the official residence of the Haitian president. It was almost completely destroyed in the 2010 Haiti earthquake. The ruins of the building are currently being demolished.

Stade Sylvio Cator is a multi-purpose stadium in Port-au-Prince, Haiti. It is currently used mostly for association football matches, and is turfed with artificial turf. The stadium bears the name of Haitian Olympic medalist Sylvio Cator. With a capacity of 10,500, the structure is undergoing renovation and expansion as of August 2011. It was partly destroyed by the earthquake in Haiti in January 2010, and a tent-city sprouted within its confines.

More reading: Wikipedia Article
Located at 18.55 -72.34 (Lat./Long.); Less than 1 km away
Tags: Anglican cathedrals in the Caribbean, Buildings and structures in Port-au-Prince, Churches in Haiti, Religious organizations established in 1863

The Hotel Oloffson is an inn in central Port-au-Prince, Haiti. The main structure of the hotel is a 19th century Gothic gingerbread mansion set in a lush tropical garden. The mansion was built as a residence for the powerful Sam family, including two former presidents of Haiti. The hotel was the real-life inspiration for the fictional Hotel Trianon in Graham Greene's famous 1966 novel The Comedians.

More reading: Wikipedia Article
Located at 18.53 -72.34 (Lat./Long.); Less than 1 km away
Tags: Buildings and structures in Port-au-Prince, Companies of Haiti, History of Haiti, Hotels established in 1935, Hotels in Haiti 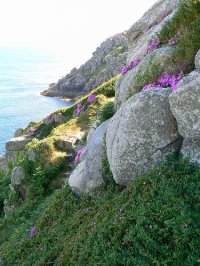 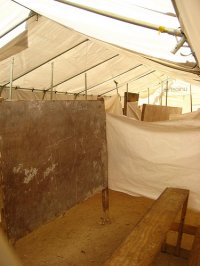 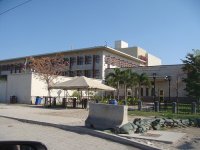 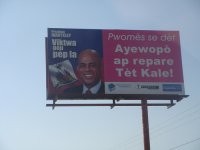 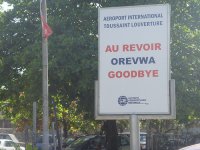