Local time in Tuban is now 10:21 AM (Friday) . The local timezone is named " Asia/Jakarta " with a UTC offset of 7 hours. Depending on your flexibility, these larger cities might be interesting for you: Tuwiri Wetan, Tulungagung, Tasikmalaya, Surabaya, and Singaraja. When in this area, you might want to check out Tuwiri Wetan . We found some clip posted online . Scroll down to see the most favourite one or select the video collection in the navigation. Are you looking for some initial hints on what might be interesting in Tuban ? We have collected some references on our attractions page.

Sunan Bonang is one of "Wali Songo", the preachers in Islam. This grave is located at the center of the town, exactly behind the Great Mosque (Masjid Agung), beside Tuban square. This grave complex is ..

The unique thing of Akbar Cafe is the charming of its huge spaces and also its long tunnels. There are also many interesting scenery of cave which you can not find in other places. If we come in the c ..

Sunan Bonang is one of "Wali Songo", the preachers in Islam. This grave is located at the center of the town, exactly behind the Great Mosque (Masjid Agung), beside Tuban square. This grave complex is ..

Nglirip waterfall tourism object is located between Montong and Jojogan so that the visitors can directly see the location by passing this route. The second route to go through is by passing Singgahan ..

Tuban is a town located on the north coast of Java, in Tuban Regency, approximately 100 km west of Surabaya, the capital of East Java. Tuban is surrounded by Lamongan in the east, Bojonegoro in the south and Rembang, Central Java in the west. As an ancient town, Tuban is of considerable historical and cultural value. The most prominent feature is the beauty of the scenery such as beaches, caves, and forests, especially the teak forest. 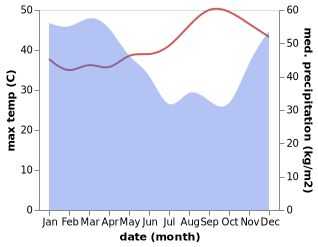