Local time in Surabaya is now 04:51 PM (Saturday) . The local timezone is named " Asia/Jakarta " with a UTC offset of 7 hours. Depending on your mobility, these larger cities might be interesting for you: Tulungagung, Tuban, Surabaya, Situbondo, and Singaraja. When in this area, you might want to check out Tulungagung . We discovered some clip posted online . Scroll down to see the most favourite one or select the video collection in the navigation. Are you looking for some initial hints on what might be interesting in Surabaya ? We have collected some references on our attractions page.

Gelora 10 November Stadium is a multi-purpose stadium located in Surabaya, Indonesia. It is currently used mostly for football matches. The stadium holds 30,000 people. It is the home stadium of Persebaya Surabaya. Gelora 10 November is the home base for Persebaya Surabaya, which is considered as one of the major football clubs in Indonesia (with 3 top league champions and some other cups).

Pasar Atum Mall is a large trading mall in Surabaya, Indonesia. It is located at the north part of Surabaya. It was built due to the burned parts of the Atum Market. It was rebuilt to protect the name of the market itself.

Heroic Monument, also known as Heroes Monument is a monument in Surabaya, Indonesia. It is the main symbol of the city, dedicated to the people who died during the Battle of Surabaya on November 10, 1945. The 10th November Museum is located under the monument. Monument of Heroes, is a landmark monument in the city of Surabaya. This monument is 41.15 meters tall phallus-shaped or inverted spikes. Body-shaped monument arches (Canalures) by 10 arches, and is divided into 11 sections.

The Hotel Majapahit is a historic luxury hotel in Surabaya, Indonesia. Located at 65 Jalan Tunjungan, Surabaya. The hotel was founded in 1910 as Hotel Oranje by Lucas Martin Sarkies who commissioned Regent Alfred John Bidwell to design the hotel. The hotel opened on 1 July 1911. A new art deco style lobby extension was opened in 1936. The opening was celebrated with a royal party attended by Crown Prince Leopold III from Belgium, Princess Astrid from Sweden and Charlie Chapman.

Surabaya Plaza is a shopping centre in Surabaya. 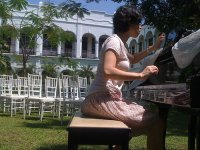 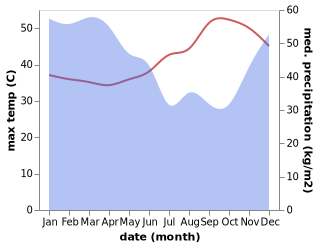