Delve into Kubangkepuh in Indonesia

Kubangkepuh in the region of Banten is a city in Indonesia - some 60 mi or ( 97 km ) West of Jakarta , the country's capital .

Current time in Kubangkepuh is now 06:05 PM (Thursday) . The local timezone is named " Asia/Jakarta " with a UTC offset of 7 hours. Depending on your travel modalities, these larger destinations might be interesting for you: Terate, Toyomerto, Tasikmalaya, Bandar Lampung, and Serdang Barat. While being here, make sure to check out Terate . We encountered some video on the web . Scroll down to see the most favourite one or select the video collection in the navigation. Are you curious about the possible sightsseing spots and facts in Kubangkepuh ? We have collected some references on our attractions page.

Merak is a city and seaport in Cilegon, Banten, on the northwestern tip of Java, Indonesia. The port and town are named after the Green Peafowl, which once lived in the region, but is now very rare. The port is connected to Jakarta via the Jakarta-Merak Toll Road.

HMAS Perth was a modified Leander-class light cruiser operated by the Royal Australian Navy (RAN) during World War II. She was constructed for the Royal Navy, and commissioned as HMS Amphion in 1936. After several years on the North America and West Indies Station, the cruiser was transferred to the RAN in 1939 and recommissioned as HMAS Perth. At the start of World War II, the cruiser was used to patrol Australian waters, before being sent to the Mediterranean at the end of 1940.

Japanese cruiser Natori was a Nagara-class light cruiser in the Imperial Japanese Navy. It was named after the Natori River in Miyagi prefecture, Japan.

USS Houston (CA-30) (originally designated CL-30), nicknamed the "Galloping Ghost of the Java Coast", was a Northampton-class heavy cruiser of the United States Navy. She was the second Navy ship to bear the name "Houston". She was launched by Newport News Shipbuilding & Dry Dock Company, Newport News, Virginia on 7 September 1929, sponsored by Elizabeth Holcombe, and commissioned as CL-30 on 17 June 1930, Captain Jesse Bishop Gay commanding. Her designation was changed to CA-30 on 1 July 1931. 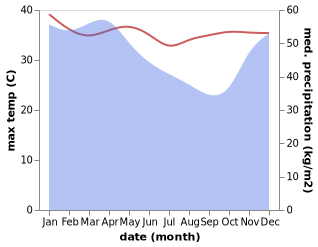