Local time in Ende is now 07:24 AM (Thursday) . The local timezone is named " Asia/Makassar " with a UTC offset of 8 hours. Depending on your mobility, these larger cities might be interesting for you: Praiyawang, Wolowaru, Watuapi, Waioti, and Waingapu. When in this area, you might want to check out Praiyawang . We discovered some clip posted online . Scroll down to see the most favourite one or select the video collection in the navigation. Are you looking for some initial hints on what might be interesting in Ende ? We have collected some references on our attractions page.

Komodo to Alor by microlight

Preview of Ericetmanu's blog at TravelPod. Read the full blog here: www.travelpod.com This blog preview was made by TravelPod using the TripAdvisor™ TripWow slideshow creator. Entry from: Moni, Indone ..

www.TravelsWithSheila.com When a travel guide or book tells you the "best time" to visit a country, listen to them! I knew this was still rainy season in Indonesia but wanted to see the Komodo Dragons ..

Ende Regency is one of the regencies which divide the island of Flores, within East Nusa Tenggara Province, Indonesia. The town of Ende is the capital of Ende Regency. The area of Ende Regency is 2,046.62 km, and it had a population of 238,127 (2008 estimate).

H. Hasan Aroeboesman Airport, also known as Ende Airport or Isi Airport, is an airport in Ende on Flores island in the East Nusa Tenggara province of Indonesia.

Ende is the capital of the Ende Regency, East Nusa Tenggara province of Indonesia. Ende is located on the southern coast of Flores Island. The city has a population of 60,000 residents.

Iya is a stratovolcano located in the south-central part of the island of Flores, Indonesia, south of the city of Ende.

Sukaria is a 8 km wide caldera to the northeast of Mount Iya on Flores, Indonesia. The southern caldera wall is irregular and a small fumarolic area is found in the western flanks which contains several vents and eject geyser-like water column. No historical records of its activity are available from this volcanic caldera. 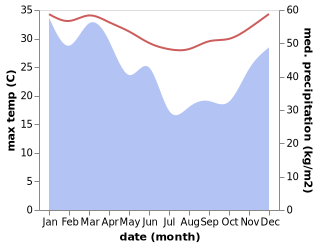