Delve into Ardabil in Iran

Local time in Ardabil is now 02:43 AM (Thursday) . The local timezone is named " Asia/Tehran " with a UTC offset of 3.5 hours. Depending on your mobility, these larger destinations might be interesting for you: Pir Aqun, Arallu-ye Bozorg, Aqa Baqer, Zardalu, and Zanjan. While being here, you might want to check out Pir Aqun . We discovered some clip posted online . Scroll down to see the most favourite one or select the video collection in the navigation. Are you curious about the possible sightsseing spots and facts in Ardabil ? We have collected some references on our attractions page.

A Walk In Tabriz's Bazar

The Bazar of Tabriz in Iran is famous for its big scale and long history among the Middle East. 中近東で有数の規模と歴史を誇るという、イラン、タブリーズのバザール。 ..

The Rezazadeh Stadium is an all-seater indoor arena located in Ardabil, Iran. It was built in 2006 and has a capacity of 6,000 people. The stadium is named after Olympic Gold medalist and world record weightlifter Hossein Rezazadeh.

Shorabil is a lake located in a hilly area south of the Iranian city of Ardabil. Ardabil University is located near the lake. The surface of the lake is 640,000 m², and is covered with a thin white layer of minerals which are useful in healing skin diseases and rheumatism. The leisure complex of Shorabil is located near the lake. The lake is ringed by a scenic roadway offering views of the lake and the nearby Sabalan mountain.

Several earthquake catalogues and historical sources describe the Ardabil earthquake of 893 as a destructive earthquake that struck the city of Ardabil (in present day Iran), on 23 March 893. The magnitude was unknown but the death toll was reported to be very large. The USGS in their 'list of Earthquakes with 50,000 or More Deaths' give an estimate that 150,000 were killed, which would make it the ninth deadliest earthquake in history.

Ardabil Airport is an airport northeast of Ardabil, in northwestern Iran. 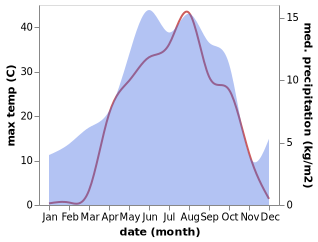