Current time in Tabriz is now 11:39 AM (Saturday) . The local timezone is named " Asia/Tehran " with a UTC offset of 3.5 hours. Depending on the availability of means of transportation, these more prominent locations might be interesting for you: Oghlu, Mosul, Mahalleh-ye Qara Malek, Zabarlu, and Vanyar. Since you are here already, make sure to check out Oghlu . We saw some video on the web . Scroll down to see the most favourite one or select the video collection in the navigation. Where to go and what to see in Tabriz ? We have collected some references on our attractions page.

Tabriz (Persian and Azeri: تبریز Təbriz Armenian: Թավրիզ) is the largest city in north-western Iran with a population of 1,5 million people (2006 estimation). Tabriz is situated north of the volcanic ..

The Bazaar of Tabriz (Persian بازار تبریز, Bāzār-e Tabriz) is one of the oldest bazaars of the Middle East and the largest covered bazar in the world. It was inscribed as World Heritage Site by UNESCO in July 2010. Tabriz has been a place of cultural exchange since antiquity. Its historic bazaar complex is one of the most important commercial centres on the Silk Road.

Tarbiyat is a pedestrian street in center of Tabriz. It was built during the Pahlavi Dynasty (the first Pahlavi) and named in memory of Tabriz's mayor Mohammad Ali Khan-e Tarbiyat, who was responsible for the modernization project of Tabriz.

The Tabriz Fire Fighting Tower is a fire fighting tower in Tabriz, Iran. The tower, standing at 23 m, was built in 1917 . It was used to investigate fire related incidents inside the city. An observer in the top of the tower stood for 24 hours of the day was watching for whole of the city for any signs of smoke and fire and when he saw any evidence the firemen were informed with him and sent to the fire incident location.

, front view]] Sa'at Tower (Sa'at Qabağı in Azerbaijani Turkic) also known as Tabriz Municipality Palace is the head office of the municipal government of Tabriz, the capital of East Azarbaijan Province, Iran. The Municipality was built in 1934 as the Tabriz municipal central office. After World War II it was used by the Azerbaijan Democrat Party as a Government Office. 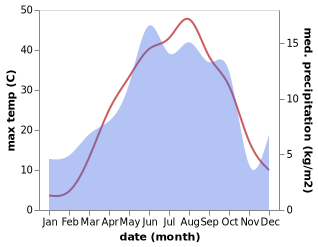