Time in Stroppo is now 10:34 PM (Sunday) . The local timezone is named " Europe/Rome " with a UTC offset of 1 hours. Depending on your budget, these more prominent places might be interesting for you: Nice, Grasse, Gap, Dijon, and Chambéry. Being here already, consider visiting Nice . We collected some hobby film on the internet . Scroll down to see the most favourite one or select the video collection in the navigation. Check out our recomendations for Stroppo ? We have collected some references on our attractions page.

A Midsummer Pageant in the village of Morinesio, high in the Val Maira of the Italian Alps. Since 2002, processional artists Alex Kahn and Sophia Michahelles have worked with local villagers to create ..

A Midsummer Pageant in the village of Morinesio, high in the Val Maira of the Italian Alps. Since 2002, processional artists Alex Kahn and Sophia Michahelles have worked with local villagers to create ..

Lago della Meja is a lake in the Province of Cuneo, Piedmont, Italy.

The Colle Fauniera (also known as Colle dei Morti, "Hill of the Dead") is a mountain pass in the Cottian Alps, Piedmont, northern Italy, located at a 2,480+ m of altitude. It is part of the communal territory of Castelmagno and Demonte. It connects the Valle Grana, which ends here, with the Vallone dell'Arma (a lateral of the Valle Stura di Demonte). The name Colle dei Morti stems from a fierce fighting occurred in the nearby during the 17th century between Franco-Spanish and Piedmontese troops.

More reading: Wikipedia Article
Located at 44.39 7.12 (Lat./Long.); Less than 13 km away
Tags: Geography of Piedmont, Mountain passes of the Alps, Transport in Piedmont

The Rifugio Campeggio Campo Base is an alpine refuge located in the Municipality of Acceglio, in the Province of Cuneo, Italy.

Rocca la Meja is a mountain in the Cottian Alps, in the comune of Canosio, Piedmont, northern Italy. It has an altitude of 2,831 m and it is located in the Maira Valley. Of pyramidal shape, it is mostly composed of dolostone-like limestone, and stands in a plateau known as Meja-Gardetta.

More reading: Wikipedia Article
Located at 44.42 7.33 (Lat./Long.); Less than 19 km away
Tags: Mountains of Piedmont, Mountains of the Alps, Two-thousanders

The Guil is a 51.6 km long river in the Hautes-Alpes département, southeastern France. Its source is several small streams which converge in the lake Lestio, at Ristolas. It flows generally west, through the Queyras. It is a left tributary of the Durance into which it flows at Guillestre. 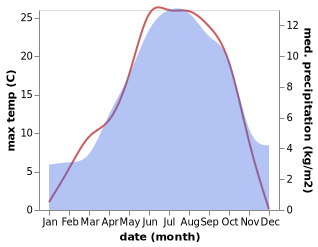