South Tarawa in the region of Gilbert Islands with its 40,311 inhabitants is a place in Kiribati and is the capital of this country.

Time in South Tarawa is now 01:35 PM (Wednesday) . The local timezone is named " Pacific/Tarawa " with a UTC offset of 12 hours. Depending on your budget, these more prominent locations might be interesting for you: Tabiteuea Village, Nabeina Village, Marenanuka Village, Buota Village, and Abatao Village. Since you are here already, consider visiting Tabiteuea Village . We saw some hobby film on the internet . Scroll down to see the most favourite one or select the video collection in the navigation. Where to go and what to see in South Tarawa ? We have collected some references on our attractions page.

ROZ SAVAGE MAKES LANDFALL IN TARAWA - Roz Savage, the first female to row solo from San Fransisco To Hawaii, and again from Hawaii to Tarawa, Kiribati, Micronesia makes landfall here and is welcomed i ..

Bairiki is one of the biggest towns in Kiribati which has commercial buildings, the national stadium, the headquarter of national telecom company (TSKL), and governmental offices. But each one is very ..

Bairiki National Stadium is located in Bairiki, Kiribati. It is the national stadium and the home of Kiribati's national football team. The stadium's capacity is around 2,500.

Betio is an island and a town at the extreme southwest of South Tarawa in Kiribati. The main port of Tarawa Atoll is located there.

Hawkins Field is a former World War II airfield on Betio, Tarawa in the Gilbert Islands of the Central Pacific. The airfield was named in honor of USMC 1st Lt. William Dean Hawkins who was killed in the battle to recapture Tarawa, and earned the Medal of Honor.

Bikeman Island is a submerged islet about a half-hour's canoe ride Northeast of Betio, Kiribati. Due to changing currents and the construction of a causeway between Betio and Bairiki, Bikeman has been submerged since the early 1990s. If one were to stand on Bikeman today, the water would reach up to one's knees. A picture of Bikeman circa 1976 is available on Flickr.

The House of Assembly of Kiribati has 46 members, 44 elected for a four year term in single-seat and multi-seat constituencies, 1 delegate from Banaba Island and 1 ex-officio member (the Attorney General). Created by the Constitution of 12 July 1979, its seat has been at Ambo on South Tarawa since October 2000. From 1979 to 2000, it was at Bairiki. The current Kiribati Electoral Commissioner is Rine Ueara. 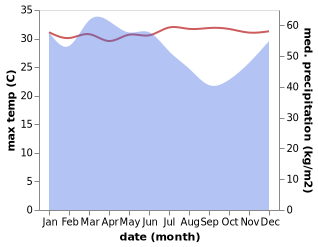