Antananarivo in the region of Analamanga with its 1,391,433 habitants is a town located in Madagascar and is the capital of this country.

Local time in Antananarivo is now 09:52 PM (Sunday) . The local timezone is named " Indian/Antananarivo " with a UTC offset of 3 hours. Depending on your flexibility, these larger cities might be interesting for you: Toamasina, Tsararivotra, Namontana, Marohoho, and Manja. When in this area, you might want to check out Toamasina . We found some clip posted online . Scroll down to see the most favourite one or select the video collection in the navigation. Are you looking for some initial hints on what might be interesting in Antananarivo ? We have collected some references on our attractions page.

A photo journey to Madagascar in October 2008. Part 1 includes Antananarivo (Tana) and Ambohimanga. ..

www.muntanyisme.eu - Description in English, French and Spanish This popular restaurant has regular music recitals, including a piano bar on Friday, traditional performances from noon to sunset every ..

The Andafiavaratra Palace, located on the highest hilltop of the capital city of Antananarivo, was the residence of Prime Minister Rainilaiarivony of Madagascar, who governed the island kingdom in the late 19th century. The building currently serves as a museum and the estimated 1466 objects of historical importance to the Kingdom of Madagascar that were rescued from the 1995 fire at the Rova of Antananarivo are housed here.

More reading: Wikipedia Article
Located at -18.92 47.53 (Lat./Long.); Less than 1 km away
Tags: Buildings and structures in Antananarivo, Museums in Madagascar, Palaces in Madagascar

The Rova of Antananarivo /ˈruːvə/ is a royal palace complex in Madagascar that served as the home of the sovereigns of the Kingdom of Imerina in the 17th and 18th centuries, as well as the rulers of the Kingdom of Madagascar in the 19th century. Its counterpart is the nearby fortified village of Ambohimanga, which served as the spiritual seat of the kingdom in contrast to the political significance of the Rova in the capital.

The Ambohitsorohitra Palace is a presidential palace in the capital of Madagascar, Antananarivo. It has only a symbolic role and is not a residence of the president.

Stade Mahamasina is a multi-purpose stadium in Antananarivo, Madagascar. It is currently used mostly for rugby and football matches. The stadium has nearly 23,000 seats. In 2005, the stadium was the site of a stampede that killed 2 people during a match between South African side Kaizer Chiefs and Madagascar's USJF Ravinala. http://soccernet. espn. go. com/news/story?id=327093&cc=3888 It is also the stadium of the 2007 Indian Ocean Games.

Tsimbazaza Zoo is a zoo and botanical garden in southern Antananarivo, Madagascar, located just north of the National Assembly of Madagascar building. The only zoo of its kind in Madagascar, on November 1989, the WWF celebrated its tenth year in Madagascar by opening an environmental teaching center at the zoo. (It is said to house "the finest collection of Madagascan wildlife", with several unique species on display.

More reading: Wikipedia Article
Located at -18.93 47.53 (Lat./Long.); Less than 2 km away
Tags: Buildings and structures in Antananarivo, Zoos in Madagascar 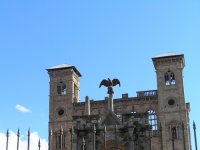 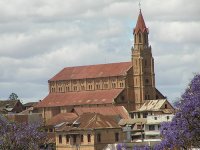 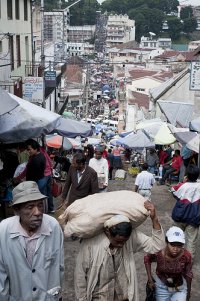 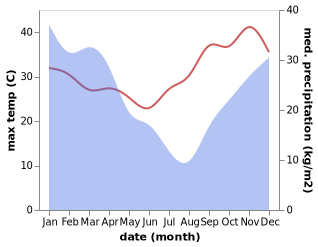