Farafangana in the region of Atsimo-Atsinanana Region with its 24,764 citizens is located in Madagascar - some 271 mi or ( 436 km ) South of Antananarivo , the country's capital city .

Time in Farafangana is now 02:52 AM (Monday) . The local timezone is named " Indian/Antananarivo " with a UTC offset of 3 hours. Depending on your budget, these more prominent places might be interesting for you: Tsivala, Tsararano, Tavia, Marohanka, and Manja. Being here already, consider visiting Tsivala . Check out our recomendations for Farafangana ? We have collected some references on our attractions page.

Atsimo-Atsinanana (South East) is a region in Madagascar. Capital: Farafangana Chief: Jhonson Andrianahy (since 2007) The region extends along the southern part of the east coast of Madagascar. It is bordered by Vatovavy-Fitovinany and Haute Matsiatra (North), Ihorombe (West) and Anosy (South).

Farafangana is a city (commune urbaine) on the south-east coast of Madagascar approximately 400 kilometres south of the capital Antananarivo. It is the capital of the Atsimo-Atsinanana region. Settlements located to the north include Lokandambo, Manambotra, Ambahikarabo and Amboahangimamy, with Ambalolo to the west. To the south are Antananabo, Manambotra Atsimo and Marosondry. The Roman Catholic Diocese of Farafangana is based in the town, led by Bishop Benjamin Marc Ramaroson.

The Canal des Pangalanes, one of the longest canals in the world, is a series of man made canals linking natural lakes and rivers running down the east coast of Madagascar from Tamatave for over 600 kilometres . It is used mainly for transportation and fishing, but it also contains unspoiled beaches popular with tourists. It was constructed by the French between 1896–1904.

Vohimasy is a town and commune in Madagascar. It belongs to the district of Farafangana, which is a part of Atsimo-Atsinanana Region. The population of the commune was estimated to be approximately 5,000 in 2001 commune census. Only primary schooling is available. The majority 91% of the population of the commune are farmers, while an additional 8% receives their livelihood from raising livestock. The most important crop is rice, while other important products are coffee, cassava and pepper. 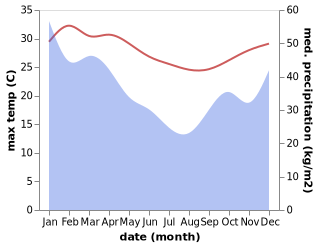