Local time in Batu Berendam is now 12:55 AM (Friday) . The local timezone is named " Asia/Kuala Lumpur " with a UTC offset of 8 hours. Depending on your flexibility, these larger cities might be interesting for you: Medan, Johor Bahru, Klang, Masjid Tanah, and Alor Gajah. When in this area, you might want to check out Medan . We found some clip posted online . Scroll down to see the most favourite one or select the video collection in the navigation. Are you looking for some initial hints on what might be interesting in Batu Berendam ? We have collected some references on our attractions page.

Located in the Heart of Melacca, Malaysia. ..

Malacca International Airport (formerly known as Batu Berendam Airport is an airport located in Batu Berendam, Malacca in Malaysia. The Airport serves the city and the state of Malacca, as well as northern Johor. The airport, which occupies 141 acres of land, was built in 1952.

More reading: Wikipedia Article
Located at 2.26 102.25 (Lat./Long.); Less than 2 km away
Tags: Airports in Malaysia, Buildings and structures in Malacca

Al-Azim Mosque is the state mosque of Malacca. It is located next to the Malacca General Hospital in Malacca Town, Malaysia. The Makam Pahlawan Negeri or State Heroes Mausoleum is situated near the mosque.

Ayer Keroh is a town situated in the state of Malacca, Malaysia. The town is a major tourist spot of the state, apart from the old Malacca Town, due to its recent hosting of various interesting attractions. The Mini Malaysia and Mini ASEAN Park is situated in the town. The Park has scaled down versions of traditional houses typically found in each of the states of Malaysia as well as those found in the ASEAN region. 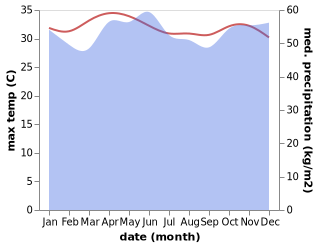