Palikir in the region of Pohnpei is a town in Micronesia and is the capital of this country.

Current time in Palikir is now 08:46 AM (Thursday) . The local timezone is named " Pacific/Pohnpei " with a UTC offset of 11 hours. Depending on the availability of means of transportation, these more prominent locations might be interesting for you: Danipei, Awak Powe, Alohkapw, Dienpo, and Nihkewe. Since you are here already, make sure to check out Danipei . We saw some video on the web . Scroll down to see the most favourite one or select the video collection in the navigation. Where to go and what to see in Palikir ? We have collected some references on our attractions page.

Sokamah or tempel: When the sakau (Piper methysticum) has been pounded (sukusuk), the pounders (wie koanoat or wie sak) play a lively tune on the basalt pounding stone (peitehl) to call the squeezer t ..

More from the dusty old videotapes shot on a trip through the Pacific islands in 1984. These are a few scenes around Hotel Pohnpei, a few rustic comfortable rooms in a jungle setting with an incredibl ..

A few short clips from my first two months in Pohnpei ..

The Federated States of Micronesia Listen/ˌmaɪkroʊˈniːʒə/ (FSM) is an independent sovereign island nation consisting of four states – from west to east, Yap, Chuuk, Pohnpei and Kosrae – that are spread across the Western Pacific Ocean. Together, the states comprise around 607 islands (a combined land area of approximately 702 km) that cover a longitudinal distance of almost 2,700 km just north of the equator.

Sokehs Island is a small island close to the north coast of Pohnpei Island in the Federated States of Micronesia. It is connected to the main island by causeway. Sokehs island is the location of Sokehs Rock, a prominent cliff face that is one of Micronesia's best-known geographic features. It was also the site of Sokehs Rebellion, an uprising by islanders in October 1910 against colonial German rule.

Sokehs is a village and municipality on the main island in the state of Pohnpei, Federated States of Micronesia. It is the location of Palikir, the federal capital. The namesake Sokehs Island is located north of the main island.

Nett is one of the administrative divisions of Pohnpei State, Federated States of Micronesia. 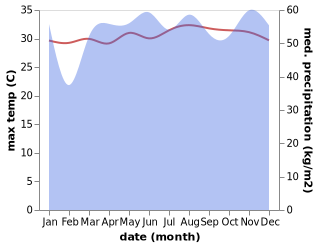