Delve into Grootfontein in Namibia

Current time in Grootfontein is now 10:29 AM (Tuesday) . The local timezone is named " Africa/Windhoek " with a UTC offset of 2 hours. Depending on your travel modalities, these larger destinations might be interesting for you: Ghanzi, Ondjiva, Windhoek, Rundu, and Maria Bronn. While being here, make sure to check out Ghanzi . We encountered some video on the web . Scroll down to see the most favourite one or select the video collection in the navigation. Are you curious about the possible sightsseing spots and facts in Grootfontein ? We have collected some references on our attractions page.

Grootfontein is a city of 14,200 inhabitants in the Otjozondjupa Region of central Namibia. It is one of the three towns in the Otavi Triangle, situated on the B8 national road that leads from Windhoek to the Caprivi Strip. Grootfontein receives an annual average rainfall of 557 millimetres, although in the 2010/2011 rainy season 956 millimetres were measured.

Grootfontein Constituency is an electoral constituency in the Otjozondjupa Region of Namibia. It has 21,595 inhabitants and consists of the town of Grootfontein and the surrounding rural area.

Grootfontein Airport is an airport serving Grootfontein, a city in the Otjozondjupa Region of Namibia. The airport is about 4 km south of the center of Grootfontein. It was formerly a military air base for the South African Air Force.

Hoba (also known as Hoba West) (pron. "HOE-bah") is a meteorite that lies on the farm "Hoba West", not far from Grootfontein, in the Otjozondjupa Region of Namibia. It has been uncovered, but because of its large mass has never been moved from where it fell. The main mass is estimated at more than 60 tons, making it the largest known meteorite (as a single piece) and the most massive naturally occurring piece of iron known at the Earth's surface. 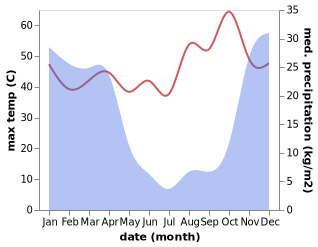