Time in Enugu is now 11:45 PM (Thursday) . The local timezone is named " Africa/Lagos " with a UTC offset of 1 hours. Depending on your travel resources, these more prominent places might be interesting for you: Douala, Malabo, Umulumgbe, Umudim, and Umuahia. Being here already, consider visiting Douala . We collected some hobby film on the internet . Scroll down to see the most favourite one or select the video collection in the navigation. Check out our recomendations for Enugu ? We have collected some references on our attractions page.

MI - Talk About It Snippet Part 1.

The Realest Cobi Flick ever Shot. ..

Nnamdi Azikiwe Stadium is a multi-purpose stadium in Enugu, Nigeria. It is currently used mostly for football matches and is the home stadium of Enugu Rangers. It was named after the first president of Nigeria. The stadium has a capacity of 22,000 people. Nnamdi Azikiwe Stadium used to belong to the Nigerian Railway Corporation (NRC). Until then it was the most flamboyant playing facility in Enugu. As far back as 1959, the facility was the sports ground of the corporation, the Eastern District.

Biafra, officially the Republic of Biafra, was a secessionist state in south-eastern Nigeria that existed from 30 May 1967 to 15 January 1970, taking its name from the Bight of Biafra (the Atlantic bay to its south). The inhabitants were mostly the Igbo people who led the secession due to economic, ethnic, cultural and religious tensions among the various peoples of Nigeria. The creation of the new country was among the causes of the Nigerian Civil War, also known as the Nigerian-Biafran War.

The River Ekulu is a 25km river and the largest body of water in the city of Enugu in Enugu State, southeastern Nigeria, and it originates in the same city as well.

Akanu Ibiam International Airport, also known as Enugu Airport, is an airport serving Enugu, the capital city of Enugu State of Nigeria. The airport is named after the late Akanu Ibiam (1906-1995), a Medical Doctor and Statesman who hailed from Afikpo in Ebonyi State. The airport was closed on February 10, 2010, by the Federal Airports Authority of Nigeria (FAAN) for the first phase of major renovation and expansion works.

Abor is a town in southeastern Nigeria, located in Enugu State near the city of Enugu. Abor is located on the Old Enugu-Nsukka Road, an important thoroughfare for travelers heading to northern Nigeria from the east. It consists of eight separate villages. 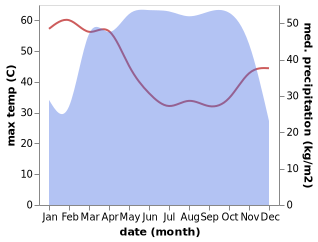