Local time in Osogbo is now 05:13 PM (Tuesday) . The local timezone is named " Africa/Lagos " with a UTC offset of 1 hours. Depending on your flexibility, these larger cities might be interesting for you: Tonkere, Oba, Iragbiji, Iloro, and Ilorin. When in this area, you might want to check out Tonkere . We found some clip posted online . Scroll down to see the most favourite one or select the video collection in the navigation. Are you looking for some initial hints on what might be interesting in Osogbo ? We have collected some references on our attractions page.

A part of "Osogbo Historical Composition" by Okonfo Rao Kawawa, a Yoruba opera telling the founding legend of Osogbo, Nigeria as well as the origin of its Osun festival. Complete video at www.youtube. ..

A Yoruba opera composed by Okonfo Rao Kawawa telling the founding legend of Osogbo, Nigeria as well as the origin of its Osun festival. Since there were repeated dry seasons at Ipole, Oba (king) Olaro ..

Osun-Osogbo or Osun-Osogbo Sacred Grove is a sacred forest along the banks of the Oshun River just outside the city of Osogbo, Osun State, Nigeria. The Osun-Osogbo Grove is among the last of the sacred forests which usually adjoined the edges of most Yoruba cities before extensive urbanization. Osun-Osgogbo festival is celebrated every year. Osun- worshippers come from all walks of life to celebrate this day.

Oshogbo Stadium is a multi-use stadium in Osogbo, Osun State, Nigeria. It is currently used mostly for football matches and is the home stadium of Prime F.C. and Ila Orangun FC. The stadium has a capacity of 10,000 people.

Ilobu is a town and the administrative headquarters of Irepodun Local Government Area of Osun State, Nigeria. Ilobu is located in a sparsely forested area and is bounded in the north by Ifon-Osun, in the south by Osogbo, in the east by Oba and in the west by Erin-Osun, and is watered by Ojutu River, Elentere river, Konda river and a few other streams. The town is said to have been founded by Laarosin - powerful warrior in the Old Oyo Empire. It has a population of about 3000825 (2006 Census). 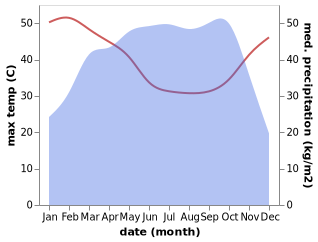