Local time in Molde is now 08:15 AM (Sunday) . The local timezone is named " Europe/Oslo " with a UTC offset of 1 hours. Depending on your flexibility, these larger cities might be interesting for you: Volda, Vike, Trondheim, Tornes, and Sylte. When in this area, you might want to check out Volda . We found some clip posted online . Scroll down to see the most favourite one or select the video collection in the navigation. Are you looking for some initial hints on what might be interesting in Molde ? We have collected some references on our attractions page.

Hiking in the Romsdalseggen Ridge

The Romsdaleggen Ridge starts and ends in Åndalsnes, and is a day tour with magnificent views over the Romsdalsfjord, the Trollveggen wall and Romsdalshorn. ..

A presentation of Classic Norway Hotels and highlights in the sorrounding area. Trollstigen, The Atlantic Road, Geiranger, Molde, The Rauma Railway. ..

Jarle Bernhoft - So Many Faces - Another way of doing it

Me performing Jarle Bernhoft's "So many faces" with my teacher at school! :D (And sorry about the quality!) ..

Rica Seilet Hotel is a high-rise building in Molde, Norway. The building is a hotel which was opened on 11 September 2002. At 16 floors and 82 metres, it is the tallest building in Molde. The tower has become a famous attraction, even though it was met with large opposition before the building was approved. The hotel contains 170 rooms, ten meeting rooms, two bars, and a restaurant. Next to the hotel, sharing the same entrance with the hotel, lies Bjørnsonhuset.

Molde idrettspark, until 1998 known as Molde stadion, is a multi-purpose stadium located in Molde, Norway. It serves as the home ground for the athletics team IL Molde-Olymp and the football clubs SK Træff and reserve and development teams of Molde FK. Prior to the 1998 opening of Aker Stadion it also served as the home ground for Molde FK's Norwegian Premier League team. The stadium opened on 28 August 1955 and has a capacity for 15,000 spectators.

The Romsdal Museum is a museum in Molde in Møre og Romsdal county, Norway. 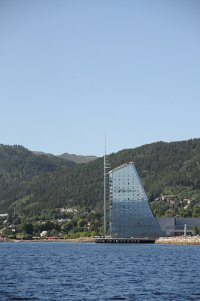 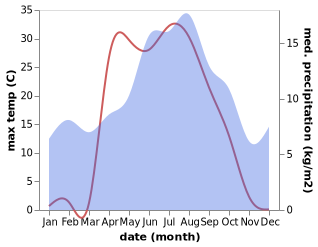