Lambakin in the region of Central Luzon with its 2,995 inhabitants is a town in Philippines - some 55 mi or ( 89 km ) North of Manila , the country's capital city .

Current time in Lambakin is now 02:22 PM (Wednesday) . The local timezone is named " Asia/Manila " with a UTC offset of 8 hours. Depending on the availability of means of transportation, these more prominent locations might be interesting for you: Tuguegarao City, Taguig City, Sexmoan, Santa Rosa, and San Leonardo. Since you are here already, make sure to check out Tuguegarao City . We saw some video on the web . Scroll down to see the most favourite one or select the video collection in the navigation. Where to go and what to see in Lambakin ? We have collected some references on our attractions page.

Central Luzon (or Gitnang Luzon in Filipino), also known as Region III (or Region 3), is an administrative division or region of the Republic of the Philippines, primarily serve to organize the 7 provinces of the vast central plain of the island of Luzon (the largest island), for administrative convenience. The region contains the largest plain in the country and produces most of the country's rice supply, earning itself the nickname "Rice Granary of the Philippines".

Founded in 1908, the Nueva Ecija University of Science and Technology (NEUST), formerly known as Central Luzon Polytechnic College, is a publicly funded university located in Cabanatuan City, Nueva Ecija, the Philippines. The university offers graduate and undergraduate courses in many specialized fields as well as vocational training programs.

Robinsons Cabanatuan is a large shopping mall located Maharlika Highway, Cabanatuan City, Philippines. The mall is owned by John Gokongwei, founder of JG Summit Holdings and Robinsons Land Co, it is the first Robinsons mall in the province. The mall was built beside NE Pacific Mall on 2007. The mall had its soft opening on November 2008 and its grand opening the next year.

The Raid at Cabanatuan, also known as The Great Raid, was a rescue of Allied prisoners of war (POWs) and civilians from a Japanese camp near Cabanatuan City, in the Philippines. On January 30, 1945, during World War II, United States Army Rangers, Alamo Scouts, and Filipino guerrillas liberated more than 500 from the POW camp. After the surrender of tens of thousands of American troops during the Battle of Bataan, many were sent to a Cabanatuan prison camp following the Bataan Death March. 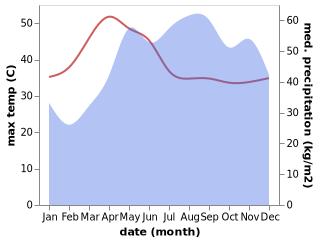