Słupsk in the region of Pomeranian Voivodeship with its 98,608 habitants is a town located in Poland - some 225 mi or ( 363 km ) North-West of Warsaw , the country's capital .

Local time in Słupsk is now 06:06 AM (Thursday) . The local timezone is named " Europe/Warsaw " with a UTC offset of 1 hours. Depending on your flexibility, these larger cities might be interesting for you: Kaliningrad, Warsaw, Berlin, Zelkowko, and Zelki. When in this area, you might want to check out Kaliningrad . We found some clip posted online . Scroll down to see the most favourite one or select the video collection in the navigation. Are you looking for some initial hints on what might be interesting in Słupsk ? We have collected some references on our attractions page.

WINTER 2010 Przemysław (Rick) Bąk has been many things - but an exhibiting muralist in the frozen north of Poland isn't one of them. Until recently, that is. Bąk has embarked on a global art world tou ..

Słupsk is a city in the Pomeranian Voivodeship, in the northern part of Poland. Before 1 January 1999, it was the capital of the separate Słupsk Voivodeship. It is also a part of the historic region of Pomerania. The city is located in the northwestern part of present-day Poland, near the Baltic Sea on the Słupia River. It is the administrative seat of Słupsk County, although it is not part of that county (the city has county status in its own right).

Stolp Synagogue was a synagogue in Stolp, Germany. It was built in 1901-1902, designed by Eduard Koch. The synagogue was set on fire by Nazis during the Kristallnacht on 9–10 November 1938.

Słupsk is a PKP and a Szybka Kolej Miejska (Tricity) railway station in Słupsk, Poland. It is a junction station, the railway line No 202 from Gdansk Central to Stargard intersects here with the railway line No. 405, joining the station with Ustka. According to the classification in terms of number of train passengers; Slupsk is a category B station.

Hala Gryfia is an arena in Słupsk, Poland. It is primarily used for basketball. Hala Gryfia holds 3,000 people and hosts the home games of Czarni Słupsk. It was built in 1982.

Kobylnica (German Kublitz) is a village in Słupsk County, Pomeranian Voivodeship, in northern Poland. It is the seat of the gmina (administrative district) called Gmina Kobylnica. It lies approximately 4 kilometres south-west of Słupsk and 107 km west of the regional capital Gdańsk. Before 1648 the area was part of Duchy of Pomerania, 1648-1945 Prussia and Germany. For the history of the region, see History of Pomerania. The village has a population of 2,248. 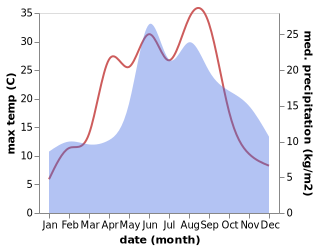