Lidzbark Warmiński in the region of Warmian-Masurian Voivodeship with its 16,540 inhabitants is a place in Poland - some 132 mi or ( 213 km ) North of Warsaw , the country's capital city .

Time in Lidzbark Warmiński is now 08:52 AM (Thursday) . The local timezone is named " Europe/Warsaw " with a UTC offset of 1 hours. Depending on your budget, these more prominent locations might be interesting for you: Kaliningrad, Zielenica, Węgorzewo, Warsaw, and Szczytno. Since you are here already, consider visiting Kaliningrad . We saw some hobby film on the internet . Scroll down to see the most favourite one or select the video collection in the navigation. Where to go and what to see in Lidzbark Warmiński ? We have collected some references on our attractions page.

POC Anniversary Meeting - Lidzbark Warmiński 2012. Each year spring time POC members are meeting in different region of Poland in order to celebrate the anniversary of the Club founding and plan the t ..

Lidzbark Warmiński is a town in the Warmian-Masurian Voivodeship in Poland. It is the capital of Lidzbark County.

The Battle of Heilsberg took place on 10 June 1807, during the Napoleonic Wars.

The transmitter Heilsberg was a large transmitter of the German Reichs-Rundfunk-Gesellschaft in the former Province of East Prussia, approximately 3 kilometres northwest of Lidzbark Warmiński (known as Heilsberg before 1945), at the road to Bagrationovsk (Preußisch Eylau).

Długołęka is a village in the administrative district of Gmina Lidzbark Warmiński, within Lidzbark County, Warmian-Masurian Voivodeship, in northern Poland. It lies approximately 5 kilometres north-west of Lidzbark Warmiński and 39 km north of the regional capital Olsztyn. Before 1772 the area was part of Kingdom of Poland, 1772-1945 Prussia and Germany.

Koniewo is a village in the administrative district of Gmina Lidzbark Warmiński, within Lidzbark County, Warmian-Masurian Voivodeship, in northern Poland. It lies approximately 6 kilometres north of Lidzbark Warmiński and 43 km north of the regional capital Olsztyn. While traditionally Prussian, with the Second Peace of Thorn in 1466 the area became part of the Kingdom of Poland until 1772; 1772-1945 Kingdom of Prussia and Germany. The village has a population of 380. 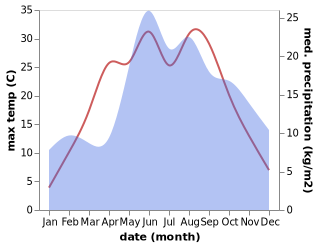