Isabel Segunda in the region of Vieques is a town in Puerto Rico - some 49 mi or ( 78 km ) South-East of San Juan , the country's capital city .

Current time in Isabel Segunda is now 01:32 PM (Wednesday) . The local timezone is named " America/Puerto Rico " with a UTC offset of -4 hours. Depending on the availability of means of transportation, these more prominent locations might be interesting for you: San Pedro de Macorís, Salvaleón de Higüey, The Valley, Basseterre, and St. John's. Since you are here already, make sure to check out San Pedro de Macorís . Where to go and what to see in Isabel Segunda ? We have collected some references on our attractions page.

Isabel Segunda is a town on the north side of the island of Vieques, Puerto Rico.

USS William M. Wood (DD/DDR-715) was a Gearing-class destroyer in the United States Navy during the final year of World War II. She was in commission for 31 years, from 1945 through 1976, serving in both the Pacific and Atlantic Fleets. She was the second Navy ship named for Navy Surgeon-General William M. Wood (1809–1880). William M. Wood was laid down on 2 November 1944 at Newark, New Jersey, by the Federal Shipbuilding & Drydock Company; launched on 29 July 1945; sponsored by Mrs. Joseph P.

WIVV is a radio station broadcasting a Religious format. Licensed to Vieques, Puerto Rico, it serves part of Puerto Rico, large areas of the US Virgin Islands, the British Virgin Islands, and the Lesser Antilles. WIVV was the first-ever fulltime Christian radio station in the Caribbean. It is currently owned by Calvary Evangelistic Mission, Inc. and features programing from Salem Communications. WIVV is one of three AM radio stations that comprise The Rock Radio Network.

Cayo Luis Peña, formerly South West Key is a small, uninhabited island off the west coast of Culebra, an island municipality of Puerto Rico. The island is a nature reserve which forms part of the Culebra National Wildlife Refuge. Visitors are allowed on the island for nature walks, snorkeling, and swimming; however, visitors are not allowed to stay on the island overnight. The island is only accessible via private water taxis. 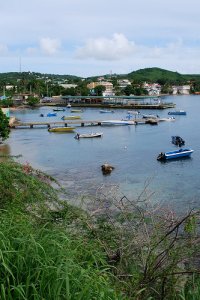