Current time in Bryansk is now 07:40 PM (Monday) . The local timezone is named " Europe/Moscow " with a UTC offset of 4 hours. Depending on the availability of means of transportation, these more prominent locations might be interesting for you: Suponevo, Steklyannaya Raditsa, Sadovyy, Raditsa-Krylovka, and Poselok Imeni Vorovskogo. Since you are here already, make sure to check out Suponevo . We saw some video on the web . Scroll down to see the most favourite one or select the video collection in the navigation. Where to go and what to see in Bryansk ? We have collected some references on our attractions page.

Bolva is a river in Kaluga and Bryansk Oblasts in Russia. It is a left tributary of the Desna River. It is 213 km in length, with a drainage basin of 4340 km². The river has its sources on the Smolensk Ridge, and flows in a southerly direction to its confluence with the Desna in the city of Bryansk. The river also flows through the towns of Dyatkovo, Fokino, Kirov and Lyudinovo. In the 19th century, the river vas navigable between Dyatkovo and Brjansk.

Svensky Monastery is a Russian Orthodox monastery located at the confluence of the Desna and Svin Rivers, three miles from Bryansk, Russia. The monastery was originally known as Svinsky, after the Svin River, but the spelling was subsequently changed to Svensky, because "svinsky" also means "of the swine" in Russian. Church legends attribute the monastery's foundation to Prince Roman of Bryansk, who was reportedly buried there.

Dynamo Stadium is a multi-purpose stadium in Bryansk, Russia. It was built in 1924, refitted in 1960 and 2004 years. Stadium is currently used mostly for football matches and is the home ground of FC Dynamo Bryansk. The stadium holds up to 10,100 people.

Bryansk International Airport (Russian: Международный аэропорт "Брянск") is an airport in Bryansk Oblast in western Russia. It is located 14 kilometres from the city of Bryansk, along the international R-22 highway connecting Moscow and Kiev. A military airfield was first built at the site in 1927 and it became a civil airport for refuelling in 1934 and an official airport in 1961. In September 1995 it became an international airport. 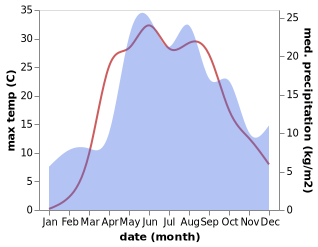