Current time in Makhachkala is now 05:32 PM (Monday) . The local timezone is named " Europe/Moscow " with a UTC offset of 4 hours. Depending on the availability of means of transportation, these more prominent locations might be interesting for you: Kurort Talgi, Leninkent, Kizlyar, Kizilyurt, and Kilichnyy. Since you are here already, make sure to check out Kurort Talgi . We saw some video on the web . Scroll down to see the most favourite one or select the video collection in the navigation. Where to go and what to see in Makhachkala ? We have collected some references on our attractions page.

The Grand Mosque in Makhachkala (Yusuf Bei Cami) is the main mosque of the Republic of Dagestan. It is supposed to have been patterned after the Sultan Ahmed Mosque in Istanbul. The building can accommodate up to 17,000 worshipers. Its construction was financed by Turkey. The mosque was completed and consecrated in 1998. It is the focal point of the city's main thoroughfare, Imam Shamil Avenue.

Semender is an urban locality under the administrative jurisdiction of Kirovsky City District of the city of Makhachkala in the Republic of Dagestan, Russia. Population: 13,677; 7,558.

Anzhi-Arena is an all-seater football stadium in Kaspiysk, Russia, and the home of Russian Premier League club Anzhi Makhachkala. The stadium was built on the site of Anzhi's former home, Khazar. It was opened in 17 March 2013 and has a capacity of 30,000 spectators. It replaced Dynamo Stadium as the home of Anzhi.

The Lun-class ekranoplan was a ground effect aircraft designed by Rostislav Evgenievich Alexeev and used by the Soviet and Russian navies from 1987 to sometime in the late 1990s. It flew using the extra lift generated by the effect of its large wings when close to the surface of the water - about four meters or less. Lun was one of the largest seaplanes ever built, with a length of 73 m, rivaling the Hughes H-4 Hercules ("The Spruce Goose") and many jumbo jets.

The Makhachkala Il-76 collision occurred on January 15, 2009 near 18:00 UTC, when two Ilyushin Il-76 military transport aircraft collided at the Uytash Airport serving the city of Makhachkala in Dagestan, Russia. One plane was landing with 31 soldiers on board, while the other plane, having unloaded all of its soldiers, was taxiing for take-off. The taxiing plane crossed the taxiway end-line but did not report its position to air traffic control (ATC). 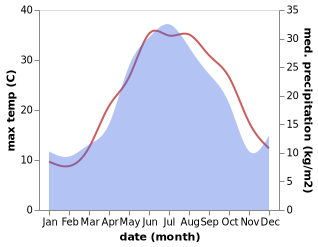