Delve into Elista in Russia

Current time in Elista is now 11:53 AM (Saturday) . The local timezone is named " Europe/Moscow " with a UTC offset of 4 hours. Depending on your travel modalities, these larger destinations might be interesting for you: Voznesenovka, Volgograd, Vladikavkaz, Troitskoye, and Peschanyy. While being here, make sure to check out Voznesenovka . We encountered some video on the web . Scroll down to see the most favourite one or select the video collection in the navigation. Are you curious about the possible sightsseing spots and facts in Elista ? We have collected some references on our attractions page.

It is Russia, small city Elista, 27.06.09, Day of Young People, Open Air, Great concert, and we EDT (The first electrodance team in Elista) have taking a part in this concert))))) look, it is our seco ..

On December 27, 2005, the Burkhan Bakshin Altan Sume ("The Golden Abode of the Buddha Shakyamuni") was opened in Elista, the capital of the Republic of Kalmykia, a federal subject of the Russian Federation. More than 5,000 people attended the opening ceremony, including representatives of Tibetan Buddhist communities from Moscow, Volgograd and Saratov.

Chess City (also referred to as City-Chess) is a large complex devoted to chess and chess competitions located east of Elista, Kalmykia, in Russia. The neighborhood-size development consists of a central, four-story domed City Chess Hall surrounded by an Olympic-style village of Californian-Mediterranean Revival Style architecture. The site has a conference center, public swimming pool and a museum of Kalmyk Buddhist art.

Elista International Airport is an international airport located near Elista city in Russia. 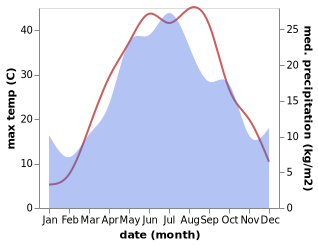