Time in Malgobek is now 01:00 AM (Monday) . The local timezone is named " Europe/Moscow " with a UTC offset of 4 hours. Depending on your travel resources, these more prominent places might be interesting for you: Erzurum, Voznesenskaya, Vladikavkaz, Batako, and Sredniye Achaluki. Being here already, consider visiting Erzurum . Check out our recomendations for Malgobek ? We have collected some references on our attractions page.

More reading: Wikipedia Article
Located at 43.48 44.59 (Lat./Long.); Less than 3 km away
Tags: Rural localities in the Republic of Ingushetia

New Redant is a village in the Malgobek region of the Republic of Ingushetia. At the census of 2002 it reported a population of 4,523 inhabitants.

More reading: Wikipedia Article
Located at 43.47 44.80 (Lat./Long.); Less than 17 km away
Tags: Rural localities in the Republic of Ingushetia 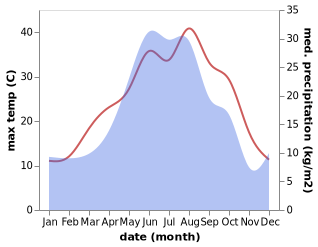