Novotitarovskaya in the region of Krasnodarskiy with its 22,630 habitants is a place located in Russia - some 729 mi or ( 1173 km ) South of Moscow , the country's capital .

Local time in Novotitarovskaya is now 01:27 PM (Tuesday) . The local timezone is named " Europe/Moscow " with a UTC offset of 4 hours. Depending on your mobility, these larger cities might be interesting for you: Zinchenko, Staromyshastovskaya, Rostov-on-Don, Primaki, and Prikubanskiy. When in this area, you might want to check out Zinchenko . Are you looking for some initial hints on what might be interesting in Novotitarovskaya ? We have collected some references on our attractions page.

Kuban is a geographic region of Southern Russia surrounding the Kuban River, on the Black Sea between the Don Steppe, Volga Delta and the Caucasus. Krasnodar Krai is often referred to as Kuban, both officially and unofficially, although the term is not exclusive to the krai and accommodates the republics of Adygea, Karachay–Cherkessia, and parts of Stavropol Krai.

The Kuban People's Republic (Russian: Кубанская Народная Республика Kubanskaya Narodnaya Respublika; Ukrainian: Кубанська Народна Республiка Kubans'ka Narodna Respublika) was an anti-Bolshevik state that comprised the territory of the Kuban in the modern-day Russian Federation during the Russian Civil War. The republic was proclaimed by the Kuban Rada on January 28, 1918 and declared its independence on February 16.

Kuban Stadium is a multi-purpose stadium in Krasnodar, Russia. It is currently used mostly for football matches and is the home stadium of FC Kuban Krasnodar and FC Krasnodar. The stadium holds 31,654 people. The stadium was opened on 30 October 1960. When built, the stadium had a capacity of 20,000. Later a second tier for additional 20,000 people was added and floodlights installed.

Yunost Stadium is a multi-use stadium in Armavir, Russia. It is currently used mostly for football matches and is the home ground of FC Torpedo Armavir. The stadium holds 3,400 people.

Krasnodar International Airport (Russian: Международный аэропорт Краснодар), also known as Pashkovsky Airport or 'Aviagorodok 5' in military parlance is the main airport serving the southern Russian city of Krasnodar. It is an International airport, and is located 12 km east of the centre of Krasnodar city. In 2011 the airport handled 2,463,000 passengers, making it the 7th busiest airport in the country. 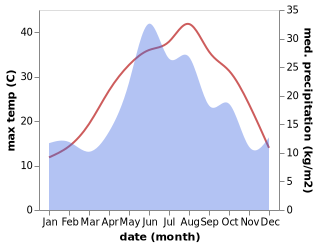