Time in Saransk is now 01:36 PM (Saturday) . The local timezone is named " Europe/Moscow " with a UTC offset of 4 hours. Depending on your budget, these more prominent places might be interesting for you: Zykovo, Yoshkar-Ola, Tatarskaya Sverbeyka, Saratov, and Penza. Being here already, consider visiting Zykovo . We collected some hobby film on the internet . Scroll down to see the most favourite one or select the video collection in the navigation. Check out our recomendations for Saransk ? We have collected some references on our attractions page.

Cathedral of St. Theodore Ushakov (Russian: Собор Святого Феодора Ушакова) is a Russian Orthodox cathedral in the Saransk, the Cathedral of the Diocese of Saransk and Mordovia. The cathedral is named for Russian saint and soldier Fyodor Ushakov.

N. P. Ogarev's Mordovian State University (MSUO) is located in the city of Saransk, the capital of the Republic of Mordovia, Russia. It was established in October 1957 as an expansion of the Mordovian National Pedagogical Institute, established in 1931. The University offers bachelor and master degrees in various academic fields. The courses are available in the form of full-time education, evening (part-time) curriculum, and correspondence education (6 years).

Start Stadium is a stadium in Saransk, Russia. It has a capacity of 11,581 spectators and is the home stadium of FC Mordovia Saransk of the Russian Premier League.

Saransk Airport is an airport in Russia located 7 km southeast of Saransk. It services small airliners, mainly Antonov An-24s. There is a single 300 x 195 m pad with 10 parking spaces.

More reading: Wikipedia Article
Located at 54.13 45.22 (Lat./Long.); Less than 7 km away
Tags: Airports built in the Soviet Union, Airports in the Republic of Mordovia

Lyambir is an air base in Russia, located 12 kilometers north of Saransk. It is a large airfield with parallel taxiway and tarmac space. Probably a forward deployment airfield. Google Earth images show airfield empty except for a few small single-engine propeller planes. 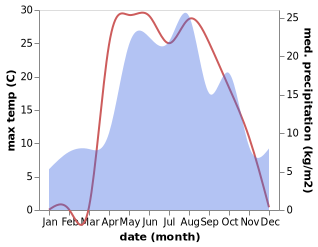