Current time in Pechenga is now 11:38 AM (Saturday) . The local timezone is named " Europe/Moscow " with a UTC offset of 4 hours. Depending on the availability of means of transportation, these more prominent locations might be interesting for you: Trifonovo, Murmansk, Luostari, Liinakhamari, and Kakuri. Since you are here already, make sure to check out Trifonovo . We encountered some video on the web . Scroll down to see the most favourite one or select the video collection in the navigation. Where to go and what to see in Pechenga ? We have collected some references on our attractions page.

The Pechenga Monastery was for many centuries the northernmost monastery in the world. It was founded in 1533 at the influx of the Pechenga River into the Barents Sea, 135 km west of modern Murmansk, by St. Tryphon, a monk from Novgorod. Inspired by the model of the Solovki, Tryphon wished to convert the local Skolts to Christianity and to demonstrate how faith could flourish in the most inhospitable lands. His example was eagerly followed by other Russian monks.

Pechenga is a river in Murmansk Oblast, Russia. It is the namesake for the Pechenga settlement, Pechenga Monastery and the Pechenga District. The river discharges into the Pechenga Bay by the Barents Sea coast. The river is heavily contaminated by heavy metals due to mining operations in the river basin.

The Petsamo–Kirkenes Offensive was a major military offensive during World War II, mounted by the Red Army against the Wehrmacht in 1944 in northern Finland and Norway. The offensive defeated the Wehrmacht's forces in the Arctic, driving them back into Norway, and was called the "Tenth Shock" by Stalin. It later expelled German forces from the northern part of Norway and seized the nickel mines of Pechenga/Petsamo.

Pechenga Bay (Russian: Печенгская губа; also Petsamo Fjord and Pechenga Fjord) is a fjord-like bay of the Barents Sea on the Kola Peninsula in the Murmansk Oblast, Russia, about 25 km east from the border with Norway. It has rocky shores and stretches inland for 17 km. The Pechenga River discharges into the bay. The settlements of Pechenga and Liinakhamari are located on the shores of the bay. 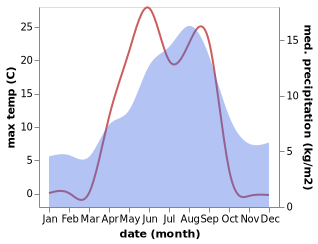