Local time in Surkhakhi is now 01:18 AM (Wednesday) . The local timezone is named " Europe/Moscow " with a UTC offset of 4 hours. Depending on your flexibility, these larger cities might be interesting for you: Erzurum, Yandyri, Vladikavkaz, Prokhladnyy, and Ordzhonikidzevskaya. When in this area, you might want to check out Erzurum . We found some clip posted online . Scroll down to see the most favourite one or select the video collection in the navigation. Are you looking for some initial hints on what might be interesting in Surkhakhi ? We have collected some references on our attractions page.

Galashki is a village in Sunzhensky District of the Republic of Ingushetia, Russia, located on the left bank of the Sunzha River near the border with the Republic of North Ossetia–Alania. Its population was about 9,000 people in 2009. It was a site of two raids by Chechen separtists during the Second Chechen War, the Galashki ambush in 2000 and the Battle of Galashki in 2002.

More reading: Wikipedia Article
Located at 43.10 44.99 (Lat./Long.); Less than 12 km away
Tags: Rural localities in the Republic of Ingushetia

Rashid Aushev Central Stadium is a multi-use stadium in Nazran, Russia. It is currently used mostly for football matches and is the home ground of FC Angusht Nazran. The stadium holds 3,200 people.

More reading: Wikipedia Article
Located at 43.23 44.74 (Lat./Long.); Less than 14 km away
Tags: Buildings and structures in the Republic of Ingushetia, Football venues in Russia

Magas Airport is an airport in the Republic of Ingushetia near Ordzhonikidzevskaya, serving the capital city of Magas and largest region city of Nazran.

More reading: Wikipedia Article
Located at 43.32 45.01 (Lat./Long.); Less than 17 km away
Tags: Airports in the Republic of Ingushetia

Republican Spartak Stadium (Russian: Республиканский стадион "Спартак") is a multi-purpose stadium in Vladikavkaz, Russia. It is currently used mostly for football matches. The stadium was built in 1962 and is able to hold 32,464 people. It is the home ground for FC Alania Vladikavkaz. 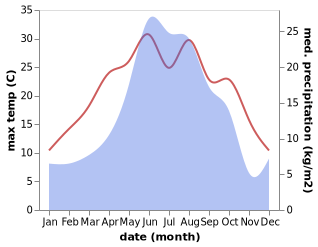