Local time in Froly is now 07:43 PM (Saturday) . The local timezone is named " Asia/Yekaterinburg " with a UTC offset of 6 hours. Depending on your flexibility, these larger cities might be interesting for you: Verkhnyaya Kur'ya, Ufa, Molotov, Okhansk, and Nytva. When in this area, you might want to check out Verkhnyaya Kur'ya . We found some clip posted online . Scroll down to see the most favourite one or select the video collection in the navigation. Are you looking for some initial hints on what might be interesting in Froly ? We have collected some references on our attractions page.

Web-documentary about the life of Tatars community in deep Russia near Urals mounts ..

Bakharevka Airport was an air base in Perm Krai, Russia located 6 km southwest of Perm. Until 1965 this was the major civilian airport in Perm City and handled medium-sized and small aircraft, such as the Li-2, Il-14, An-24, An-2, and Yak-12. After 1965 the major airport was relocated to Bolshoye Savino Airport, which was a military airfield. Recent satellite images has revealed existence of Russian air force MiG-31 "Foxhound" Interceptors parked on the base.

Aeroflot Flight 821, operated by Aeroflot-Nord in a service agreement with Aeroflot and as its subsidiary, crashed on approach to Perm Airport on 14 September 2008 at 5:10 local time. All 82 passengers and 6 crew members were killed. A section of the Trans-Siberian Railway was damaged by the crash. Flight 821 is the most deadly accident involving a Boeing 737-500 to date, surpassing the 1993 crash of Asiana Airlines Flight 733.

Zvezda Stadium, formerly (in Soviet time — until 1991) Lenin Komsomol Stadium (Russian: Стадион им. Ленинского комсомола) is a multi-use stadium in Perm, Russia. It is currently used mostly for football matches and is the home ground of FC Amkar Perm. The stadium holds 17000 people and was opened on June 5, 1969. The field was covered with artificial turf in 2005.

Until December 1, 2005, Perm Oblast was a federal subject of Russia in Privolzhsky (Volga) Federal District. According to the results of the referendum held in October 2004, Perm Oblast was merged with Komi-Permyak Autonomous Okrug to form Perm Krai. The oblast was named after its administrative center, the city of Perm. The oblast covered an area of 160,600 km², and as of the 2002 Census its population was 2,819,421.

The Lame Horse fire occurred on December 5, 2009, around 1 a.m. local time in the nightclub Khromaya Loshad (Russian: «Хромая лошадь», "Lame Horse") at 9 Kuybyshev Street, Perm, Russia. The fire started when sparks from fireworks ignited the low ceiling and its willow twig covering. The fire quickly spread to the walls and damaged the building's electrical wiring, causing the lights to fail. More than 150 people died. 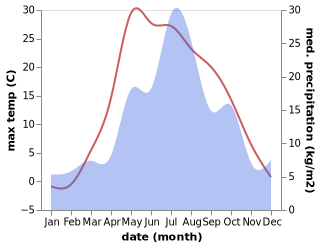