Time in Vladivostok is now 03:26 PM (Tuesday) . The local timezone is named " Asia/Vladivostok " with a UTC offset of 11 hours. Depending on your budget, these more prominent places might be interesting for you: Vladivostok, Terebilovka, Russkiy, Pospelovo, and Popova. Being here already, consider visiting Vladivostok . We collected some hobby film on the internet . Scroll down to see the most favourite one or select the video collection in the navigation. Check out our recomendations for Vladivostok ? We have collected some references on our attractions page.

Vladivostok, home to The Russian Federation's Pacific Fleet. Situated at the head of Golden Horn Bay, close to both China and North Korea. During the Soviet years the city was "closed to all foreigner ..

Dynamo Stadium is a multi-purpose stadium in Vladivostok, Russia. It is currently used mostly for football matches and is the home ground of FC Luch-Energia Vladivostok. The stadium is situated close to the main square and harbour and by one of beaches of Vladivostok. The pitch has been improved and floodlights have been installed as well. The stadium holds 10,200. http://www. sport-express. ru/art. shtml?130719

Zolotoy Rog Bay is a sheltered horn-shaped bay separated from the Peter the Great Gulf of the Sea of Japan by Shkota Peninsula on the north-west, Cape Goldobina on the east-north-east, and Cape Tigrovy on the west. The bay is seven kilometers long, with a width of about two kilometers and a depth ranging from 20 to 27 meters. The Russian port of Vladivostok lies on the hills at the head of the bay. Until the mid-19th century, the bay had been known to the Chinese as the "Gamat Bay".

The Diomede Bay is a landlocked inlet of the Peter the Great Gulf in the Russian city of Vladivostok. The bay derives its name from Diomedes, the first Russian brig to cast anchor in the bay back in 1862. The coastline is dotted with run-down fisheries, fishing wharves, and depots. 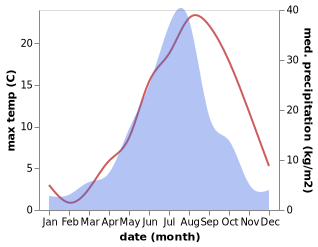