Current time in Zarubino is now 05:57 AM (Monday) . The local timezone is named " Asia/Vladivostok " with a UTC offset of 11 hours. Depending on the availability of means of transportation, these more prominent locations might be interesting for you: Wonsan, Hamhung, Vladivostok, Vityaz', and Sukhanovka. Since you are here already, make sure to check out Wonsan . We saw some video on the web . Scroll down to see the most favourite one or select the video collection in the navigation. Where to go and what to see in Zarubino ? We have collected some references on our attractions page.

The End (of the World)

As I approached Zarubino, a weird feeling emerged. The journey was ending. The end was not something I considered much until then. I lived it as if it would last forever. I had lost the idea of approa ..

The Possiet Gulf or Posyet Bay is a bay in the south-western part of the Peter the Great Gulf, between the promontories of Suslov and Gamov. It stretches for 31 kilometres from northeast to southwest and for 33 kilometers from northwest to southeast. The coastline, which forms part of the Khasansky District, is irregular and indented. Several townlets are situated on the bay, including Possiet, Zarubino, and Kraskino.

Furugelm Island is an island in the southwest part of Peter the Great Gulf in the Sea of Japan, 110 km southwest of Vladivostok. It belongs to Khasansky District of Primorsky Krai, Russia.

More reading: Wikipedia Article
Located at 42.47 130.92 (Lat./Long.); Less than 23 km away
Tags: Geography of Primorsky Krai, Islands of the Russian Far East, Islands of the Sea of Japan, Uninhabited islands of Russia 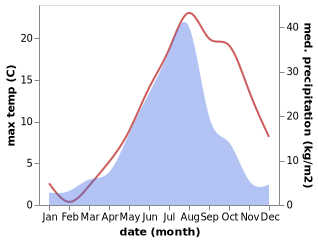