Delve into Rwamagana in Rwanda

Rwamagana in the region of Eastern Province with its 47,203 residents is located in Rwanda - some 26 mi or ( 42 km ) East of Kigali , the country's capital .

Local time in Rwamagana is now 07:16 PM (Monday) . The local timezone is named " Africa/Kigali " with a UTC offset of 2 hours. Depending on your mobility, these larger destinations might be interesting for you: Mwanza, Musoma, Kigoma, Rwamashyongoshyo, and Rwankuba. While being here, you might want to check out Mwanza . Are you curious about the possible sightsseing spots and facts in Rwamagana ? We have collected some references on our attractions page.

Musha is a village in Rwanda. It was a site of a major massacre in the Rwandan Civil War where over 1,000 people were killed. Now it is known as a health center for the region.

Lake Muhazi (Kinyarwanda: Ikiyaga cya Muhazi) is a long thin shallow lake in the east of Rwanda. The bulk of the lake lies in the Eastern Province, with the western end forming the border between the Northern and Kigali Provinces. It is a flooded valley lake, lying predominantly in an east to west direction, but with numerous offshoots in a north to south direction, formerly the location of tributaries.

Lake Mugesera is a lake in the Eastern Province, Rwanda. The lake is in the Central Plateau, southeast of Kigali. {{#invoke:Footnotes|sfn}} The lake is part of a complex of lakes and wetlands in a flat valley running in a SSE direction, 35 kilometres wide. The Nyawarungu River meanders southward through the valley, flooding it to create a zone of permanent swamps and lakes. Lake Mugesera lies on the east bank of the river, and is the largest lake in the complex.

Eastern Province is the largest, the most populous and the least densely populated of Rwanda's five provinces. It was created in early January 2006 as part of a government decentralization program that re-organized the country's local government structures. It has seven districts: Bugesera, Gatsibo, Kayonza, Ngoma, Kirehe, Nyagatare and Rwamagana. The capital city of Eastern Province is Rwamagana. 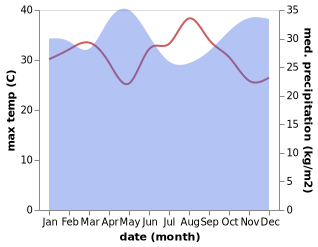