Marigot in the region of Saint Martin (general) with its 5,700 habitants is a town located in Saint Martin and is the capital of this country.

Local time in Marigot is now 10:33 PM (Wednesday) . The local timezone is named " America/Marigot " with a UTC offset of -4 hours. Depending on your flexibility, these larger cities might be interesting for you: Fort-de-France, The Valley, The Farrington, Stoney Ground, and South Hill Village. When in this area, you might want to check out Fort-de-France . We found some clip posted online . Scroll down to see the most favourite one or select the video collection in the navigation. Are you looking for some initial hints on what might be interesting in Marigot ? We have collected some references on our attractions page.

Located at the heart of Marigot, St. Martin / St Maarten and accessible without passing through a bridge! Marina Fort Louis offers 150 berths at 3.5 m/12ft depth, Fuel bunkering and Customs Clearances ..

Stade Alberic Richards is a multi-use stadium in Sandy Ground, Saint Martin. It is currently used mostly for football matches. The stadium holds 2,600 people. The stadium is located on the French side of the island.

Saint Martin, officially the Collectivity of Saint Martin is an overseas collectivity of France located in the Caribbean. It came into being on 15 July 2007, encompassing the northern parts of Saint Martin island and neighbouring islets, the largest of which is Île Tintamarre. The southern part of the island, Sint Maarten, is one of the four constituent countries that form the Kingdom of the Netherlands. It is separated from the British Overseas Territory of Anguilla by the Anguilla Channel.

Simpson Bay Lagoon is a large lagoon in the west of the Caribbean island of Saint Martin. The border between the French and Dutch halves of the island runs across the centre of the lagoon. There are two small islands that lie in the lagoon: the larger, to the north, is within the French region of Saint-Martin, the smaller, to the south, is on the Dutch Sint Maarten side. The lagoon is connected to the Caribbean sea via a small channel to the north, which flows into Baie Nettlé in Saint-Martin.

Saint Martin is an island in the northeast Caribbean, approximately 300 km east of Puerto Rico. The 87 km island is divided roughly 60/40 between France (53 km) and the Kingdom of the Netherlands (34 km); they are roughly equal in population. It is one of the smallest sea islands divided between two nations, a division dating to 1648. The southern Dutch part comprises Sint Maarten and is one of four constituent countries that form the Kingdom of the Netherlands. 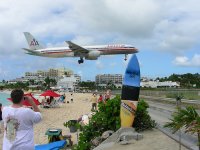 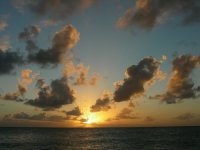 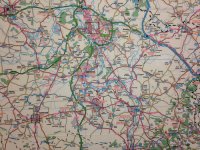