Honiara in the region of Guadalcanal with its 56,298 habitants is a place located in Solomon Islands and is the capital of this country.

Local time in Honiara is now 02:52 PM (Thursday) . The local timezone is named " Pacific/Guadalcanal " with a UTC offset of 11 hours. Depending on your mobility, these larger cities might be interesting for you: Vatunandi, Tuvaruhu, Tenavatu, Tenaru, and Taombo. When in this area, you might want to check out Vatunandi . We discovered some clip posted online . Scroll down to see the most favourite one or select the video collection in the navigation. Are you looking for some initial hints on what might be interesting in Honiara ? We have collected some references on our attractions page.

The full version of this movie has now been uploaded in two parts. See recent uploads. Excerpts from a 1975 documentary hosted by Leslie Nielsen looking back on the War World ll battle for Guadalcanal ..

The following quote is from the video cover "Starring and narrated by LESLIE NIELSEN with DR. WALTER STARCK ll, JANICE STARCK. WALLY GIBBINS Written & Produced by ROBERT STABLER Directed by JACK B. HI ..

Driving from Airport to Honiara

Driving from Airport to Honiara ..

Driving through river forde on Guadalcanal in 1974 ..

The Matanikau River of Guadalcanal, Solomon Islands, is located in the northwest part of the island. During the World War II Guadalcanal campaign, several significant engagements occurred between United States and Japanese forces near the river.

Battle of Mount Austen, the Galloping Horse, and the Sea Horse

The Battle of Mount Austen, the Galloping Horse, and the Sea Horse, part of which is sometimes called the Battle of the Gifu, took place from 15 December 1942 to 23 January 1943 and was primarily an engagement between United States and Imperial Japanese forces in the hills near the Matanikau River area on Guadalcanal during the Guadalcanal Campaign. The U.S. forces were under the overall command of Alexander Patch and the Japanese forces were under the overall command of Harukichi Hyakutake.

Lawson Tama Stadium is a multi-purpose stadium in Honiara, Solomon Islands. It is currently used mostly for football matches. The stadium is unique as the stand is built into the hillside so there is no official capacity but no more than 20,000 would fit the surrounding grassland. The stadium hosted the 2012 OFC Nations Cup.

Kokumbona (also Kakambona) is a village on the island of Guadalcanal in the Solomon Islands. It was a Japanese base during World War II and the site of a United States Marine Corps amphibious landing on 19 August 1942. Located on Guadalcanal's north coast, west of Honiara.

White River is a large settlement in the western districts of Honiara, Solomon Islands. It is a fairly large community with several defined neighbourhoods, viz. Centre, and the valleys: Independence Valley, Forestry Valley, Banana Valley, Wind Valley, and Laundry Valley. 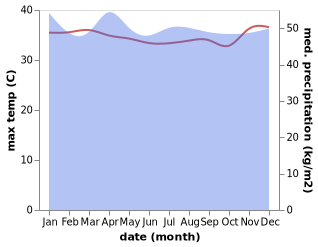