Local time in Capdepera is now 04:34 PM (Monday) . The local timezone is named " Europe/Madrid " with a UTC offset of 1 hours. Depending on your flexibility, these larger cities might be interesting for you: Algiers, Son Servera, Son Carrió, Soller, and Santa Margalida. When in this area, you might want to check out Algiers . We found some clip posted online . Scroll down to see the most favourite one or select the video collection in the navigation. Are you looking for some initial hints on what might be interesting in Capdepera ? We have collected some references on our attractions page.

Some Cala Agulla Impressions shot on RED ONE. ..

Cala Agulla is a beach in Majorca, Spain.

Ses Païsses is a Bronze Age talayotic settlement on the southeastern outskirts of Artà in northeastern Majorca. It is one of the most important and best-preserved prehistoric sites in the Balearic Islands, although it is largely overgrown with woodland, mainly Quercus ilex (holm oak), making it impossible to see the site as a whole.

Artà is one of the 53 independent municipalities on the Spanish Balearic island of Majorca. The small town of the same name is the administrative seat of this municipality in the region of Llevant.

Cala Millor is a tourist destination on the Spanish Balearic Island of Mallorca. The next largest town after Porto Cristo heading North. Cala Millor has a population of 5,665 inhabitants. It is the largest tourist development on the east coast of the island. It is situated on the island's east coast, it is now less than an hour's drive from the capital after completion of the Ma-15 highway and by-pass roads around Manacor and Sant Llorenca des Cardassar, Palma de Mallorca.

Sa Coma is a town on the eastern coast of the island of Majorca, Spain. It is close to the towns of Cala Millor and Cala Bona in the municipality of Sant Llorenç des Cardassar. The principal industry is tourism, based around its golden sandy beach, and a variety of bars and restaurants. The Spanish, the Germans and also the British are catered for, and the resort has a relaxed atmosphere in contrast to the lively resort of Magaluf on the west coast of the island. 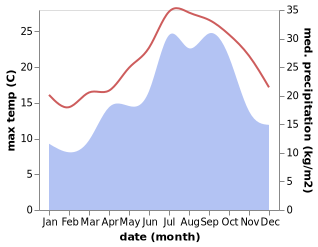